Following NYFW’s glorious Fashion Month opener, our commonwealth counterparts had their chance to play, bringing a flurry of fresh and fabulous do’s to the fashionable forefront. From bows and braided details to pops of saccharine colour, we look back at ten of the best hair moments to emerge from London Fashion Week’s Spring/Summer ’19 sojourn. 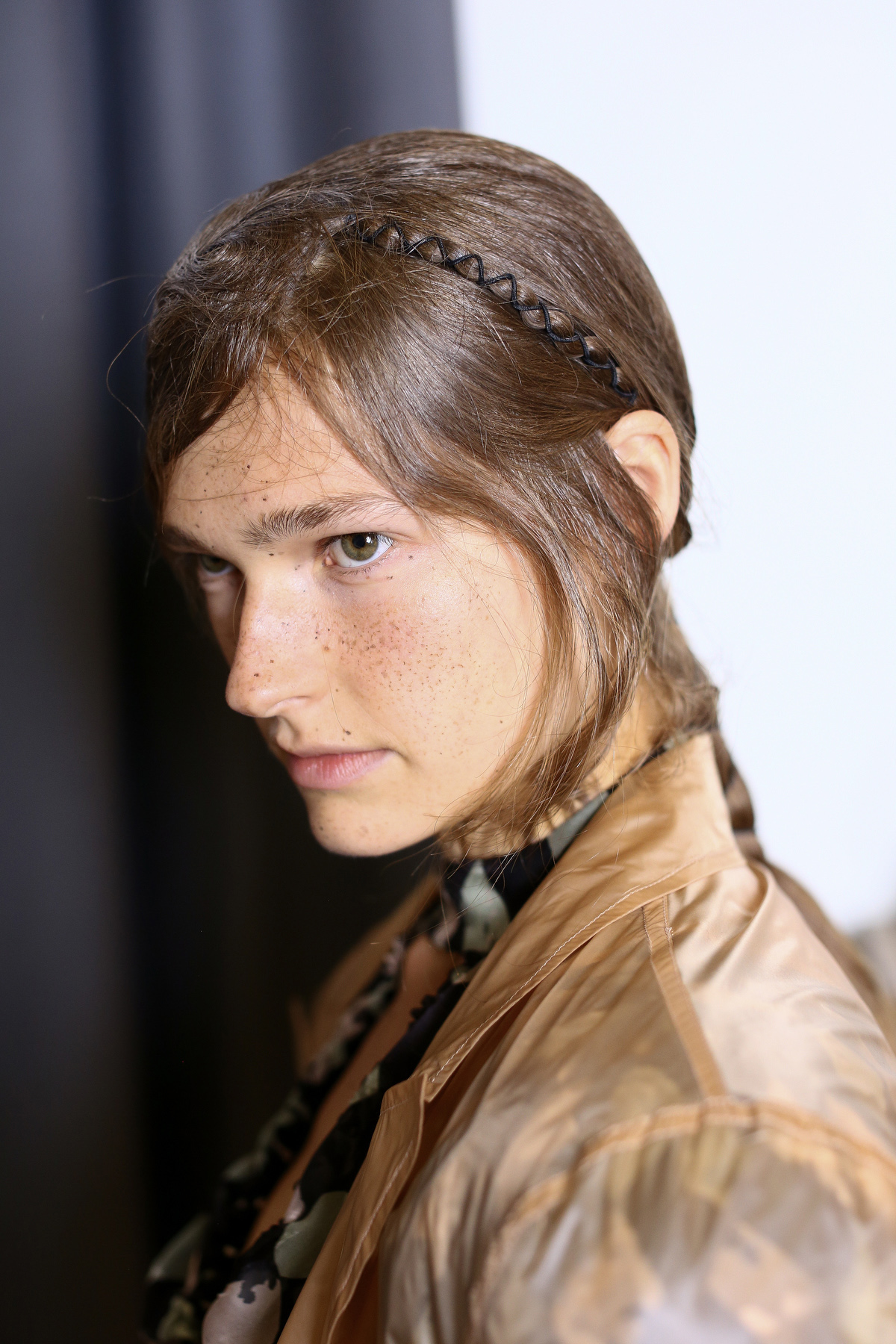 The hair look for this season’s Preen woman was soft, clean and uber-wearable: the perfect accessory for the brand’s nomadic muse. “The clothes are really moving on the catwalk, so we created something to contrast this – hair is more stiff and rigid,” said Hair Director Eugene Souleiman. “I’ve created hair that looks as though you have been in the desert heat for two days wearing a beanie hat. Hair doesn’t feel too clean and instead has a soft cobweb-like texture that has been squashed onto the head. The look is delicate and intricate, yet wonderfully wild”. Wild indeed. 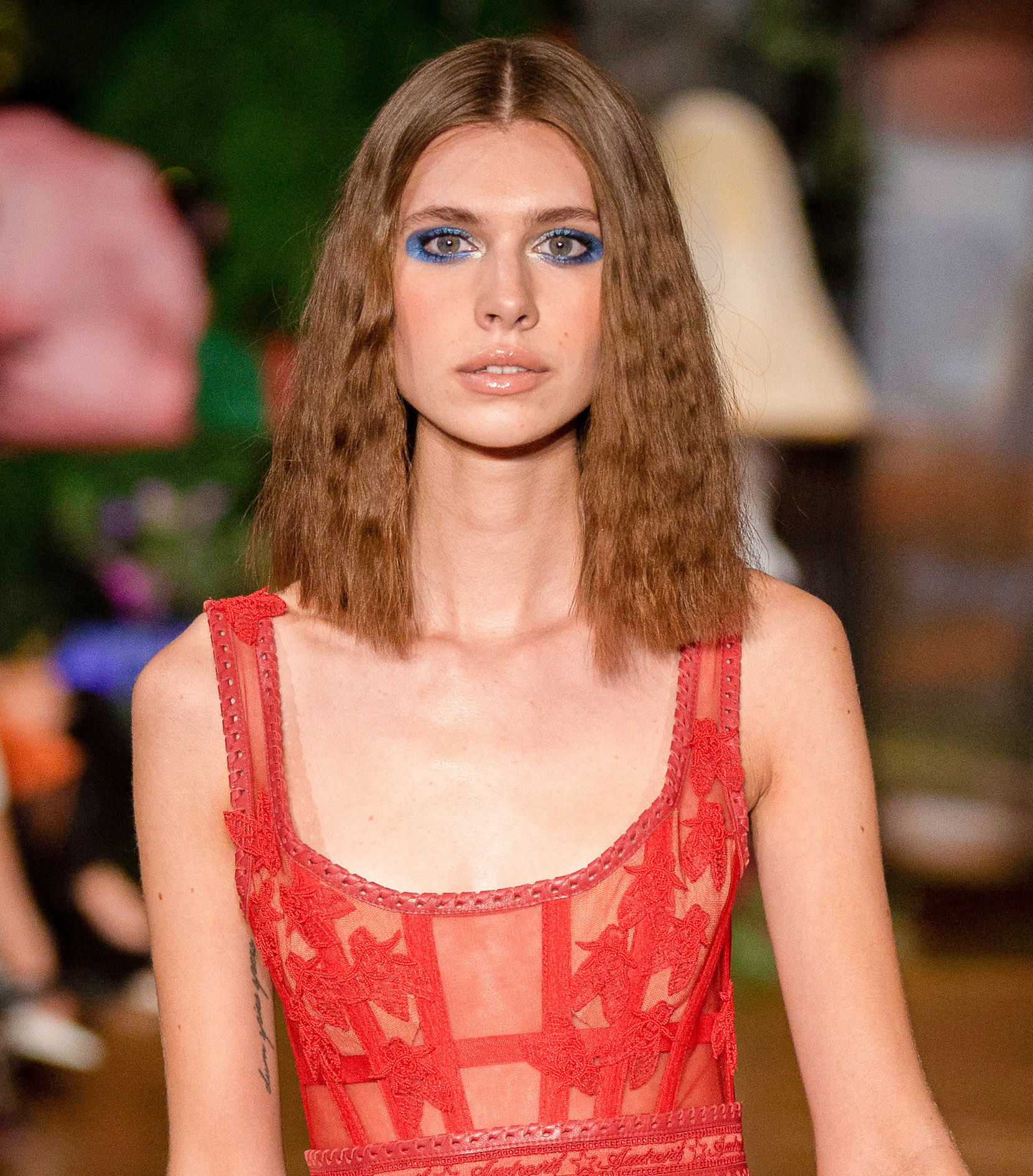 For this season’s Aadnevik show, Hair Director Antonio Corral Calero drew inspiration from the fantastical world of Alice in Wonderland, imagining an adult Alice who retains her signature childish innocence, femininity and playfulness. Hair was prepped using Moroccanoil Treatment to create a style-able foundation before which tresses were centre parted and gently pulled into a three-section plait. Plaits were next clamped between hot straightening irons to set waves before which set hair was styled with Mending Infusion for increased definition. To complete the look, hair was spritzed with Moroccanoil’s Luminous Hairspray Medium to keep waves in place whilst retaining runway movement. 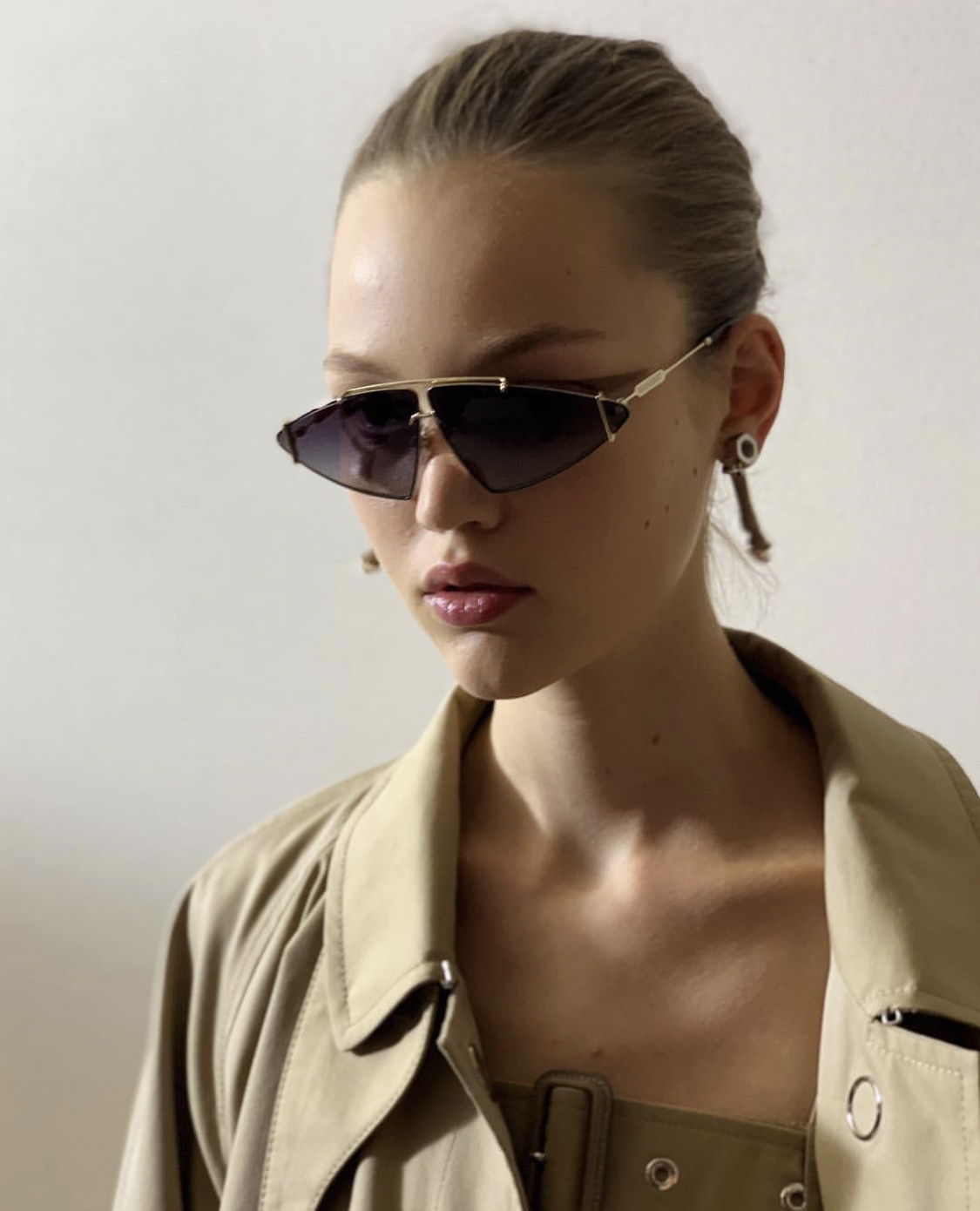 To mirror Burberry’s signature elegance, Hair Director Guido Palau alternated chic, polished chignons with slicked blow-dries for female models, opting to brush back male models’ hair in a similarly polished fashion. “We’re here at the Burberry show where there’s both female and male models,” Guido revealed backstage. “It’s Riccardo Tisci’s debut show. Some girls have a blow-dry, so I used Redken Satinwear 04 in their hair to heat protect it, then I blow-dried it back into a low chignon at the nape of the neck with Redken Fashion Work 12 to clean it up and keep it precise. The other chignon is done with Redken Guts 10 and kept loose and messy, with an ease.” 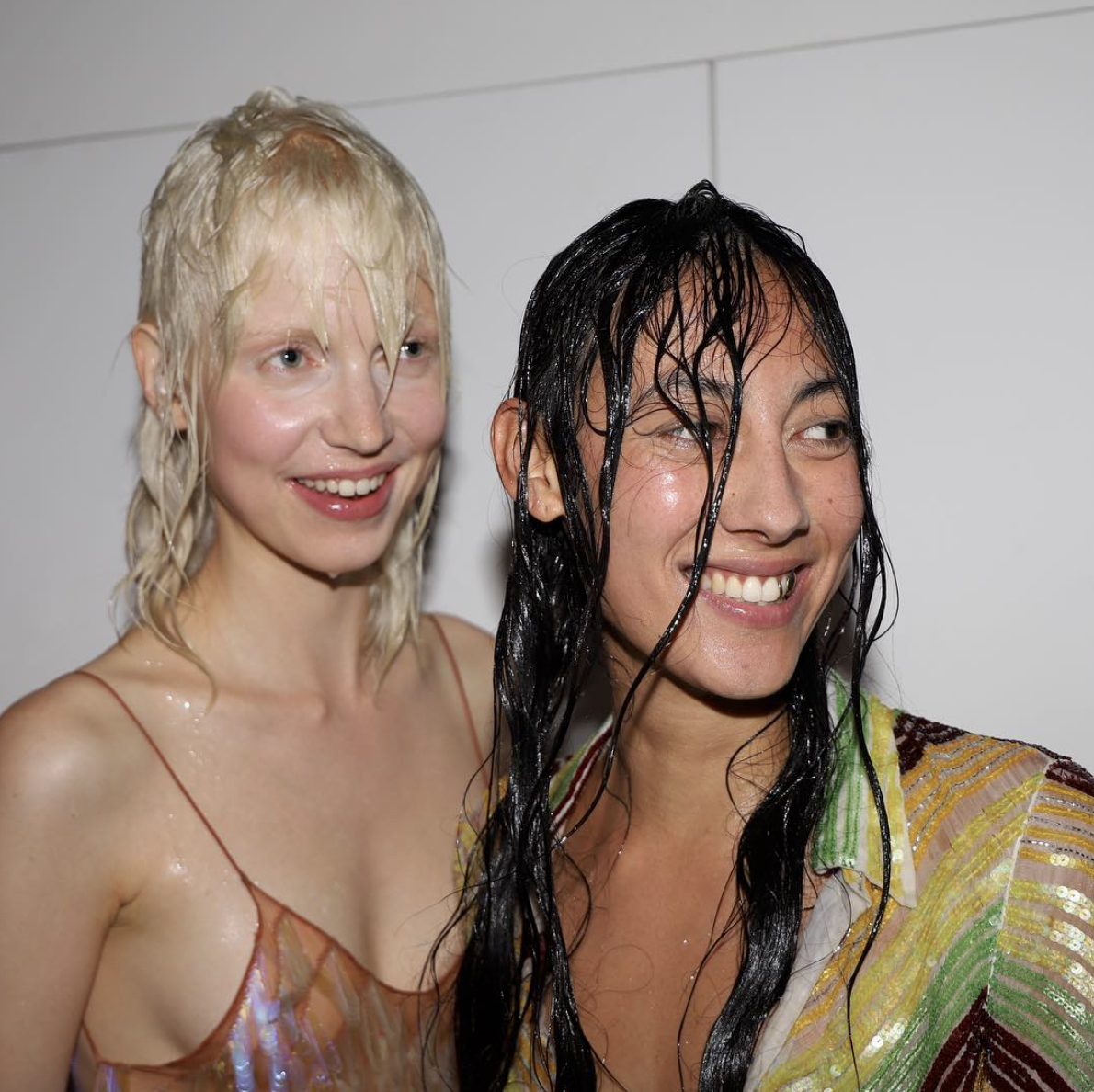 Dubbed the ‘Sweat Look’ by Hair Director Sam McKnight, the hair for this season’s Ashish show channeled rave-chic styling, offering a cool take on the millennially popular wet-look. “We have a lot of oil and water in the hair,” Sam told the UK’s Evening Standard; “[Models look as though] they’ve been out all night dancing”. To achieve the look, Sam used his namesake Cool Girl Texturising mist to create a natural texture in dry sections. “There’s a definite difference [in the wet and dry sections]. We’ve used a lot of glycerin mixed with water [for the wet sections] because the glycerin stays wet looking”. Oils were also used on select models depending on hair type. Party time. 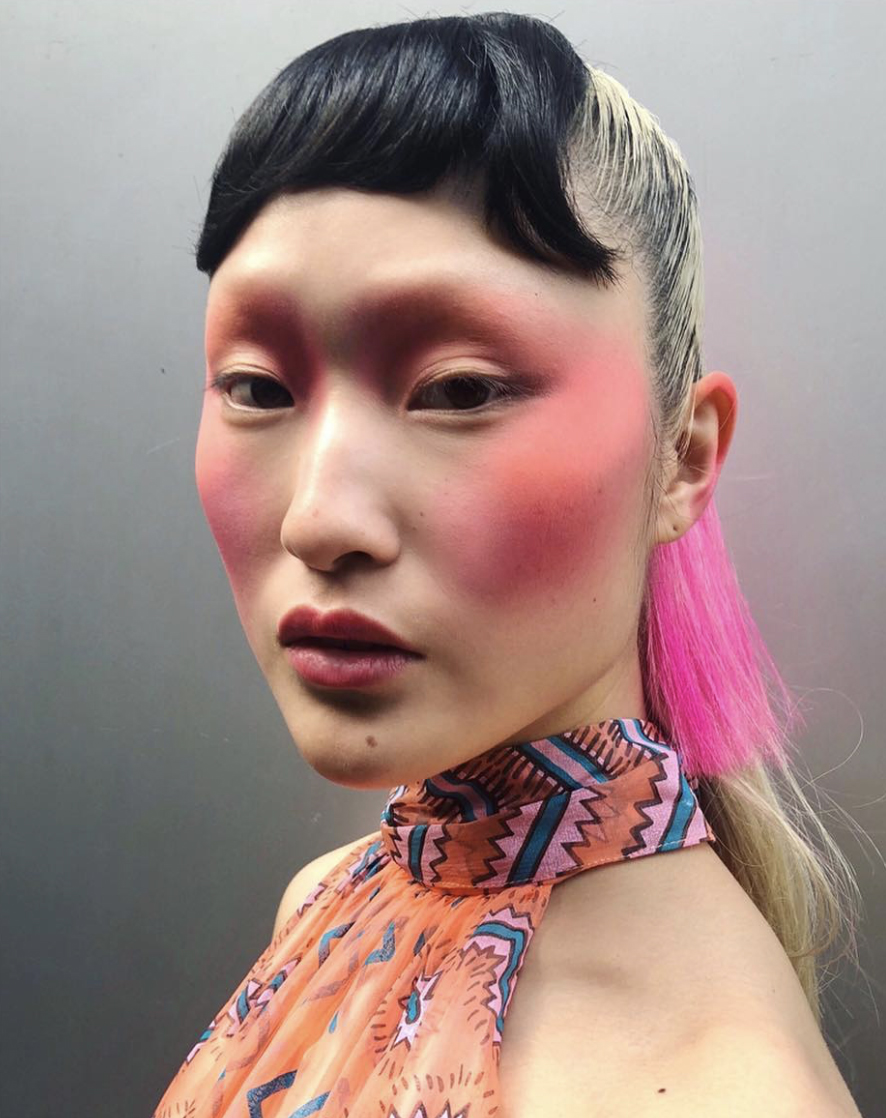 This year’s LFW season saw the re-emergence of yet another popular style trend, namely the moody, modern punk; a look perfectly encapsulated at Zandra Rhodes’ electric SS19 show. Bright pixie crops appeared alongside bold, block fringes in black and fluro pink – offset by slick, high ponytails. To achieve the hero pony, Hair Director James Oxley prepped thick hair with Fudge Professional’s Tri-Blo to create a natural shine. Finer hair was prepped with the brand’s XPander foam for increased grit and workability. Hair was next bristle brushed into a tight, high ponytail before which wefts and fringes (first coloured using the Paintbox shade ‘Pink Riot’) were clipped into place. To complete the look, hair was smoothed with Fudge Professional’s Vinyl Pomade for extra shine and sprayed with Skyscraper Extra to keep the style in place. 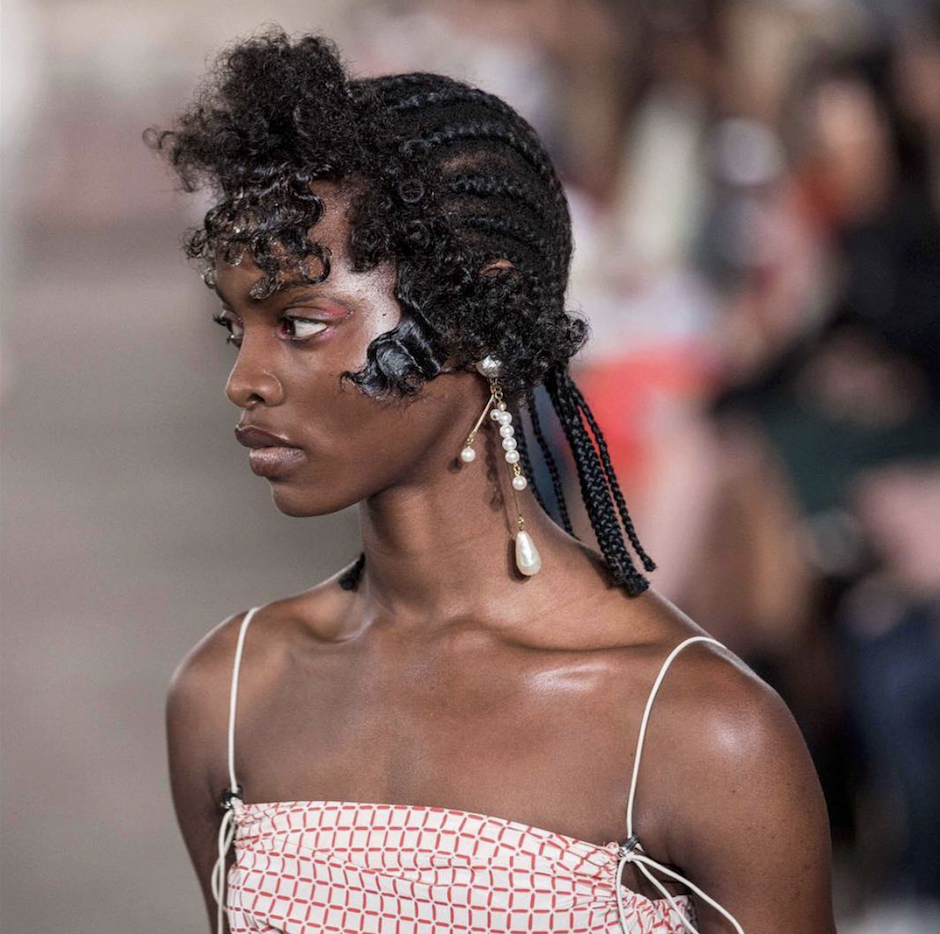 Talent incubators Fashion East powered this season’s Charlotte Knowles London show, to undeniably rave reviews. While the garments were no doubt lauded by the fashion set, it was the show’s hair styling that left perhaps the boldest impression of all (in our humble perspective at least). Looks included heavily gelled ponytails and slick downs with structural embellishments, voluminous ringlet curls and this modern take on the old Victorian up do – complete with loose tendrils and braided details. Because curls always get the girls. 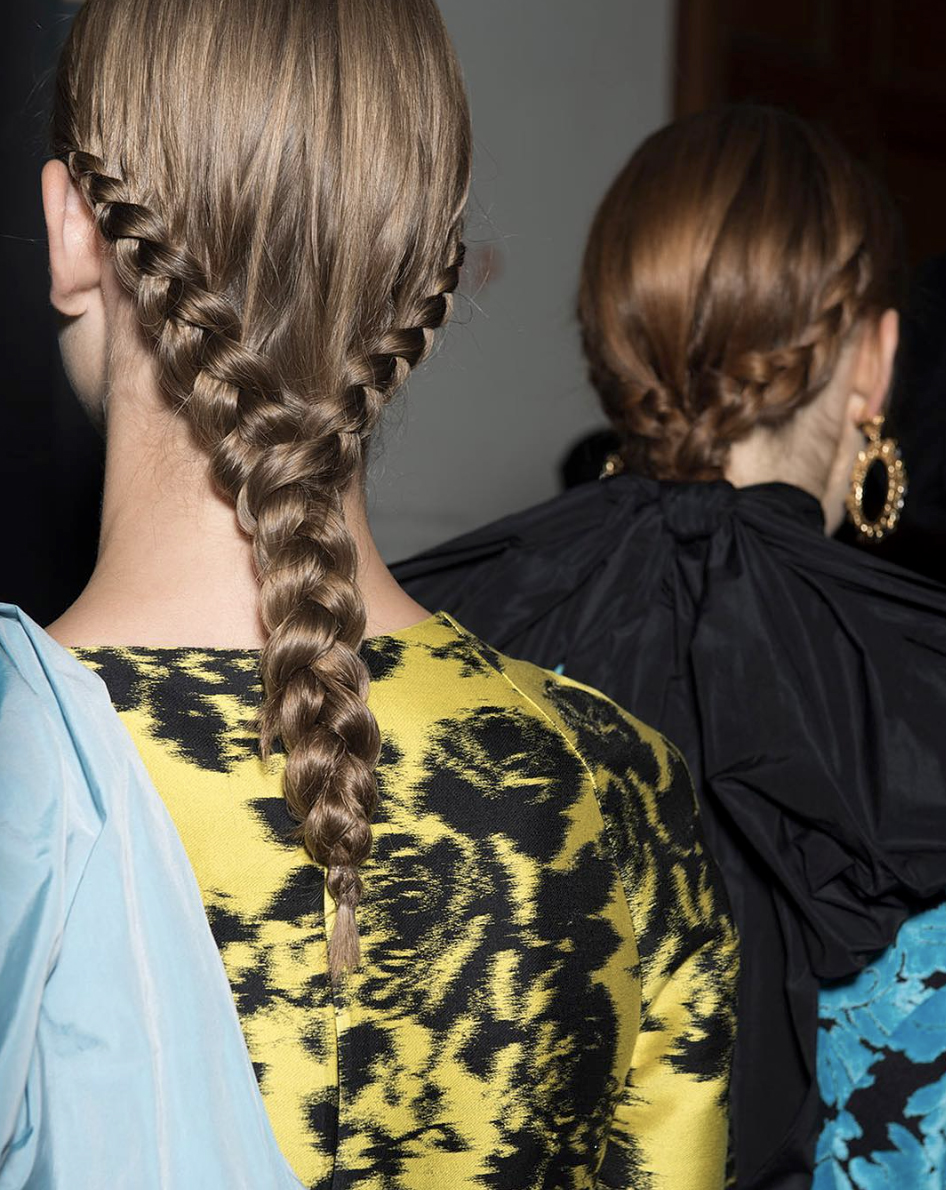 For this season’s Erdem offering, Hair Director Anthony Turner fashioned an ornate centre braid, to complement the collection’s nouveau-bohemian aesthetic and refined styling. “This is a modern version of Victorian hair – but in a very minimal way,” said Turner. “From the centre-part through to braid, it’s strict and uptight”. Hair was prepped using L’Oréal Professionnel’s Tecni.ART Full Volume Extra Mousse and Tecni.ART Pli before being combed into a centre part. Hair was next blowdried using Dyson’s Supersonic Professional hairdryer before which two braids were created at either side of the ear. Side braids were next inter-linked at the nape of the neck to create one low, central braid. The look was finished with a spray of L’Oréal Professionnel’s Infinium Pure strong hold hairspray. 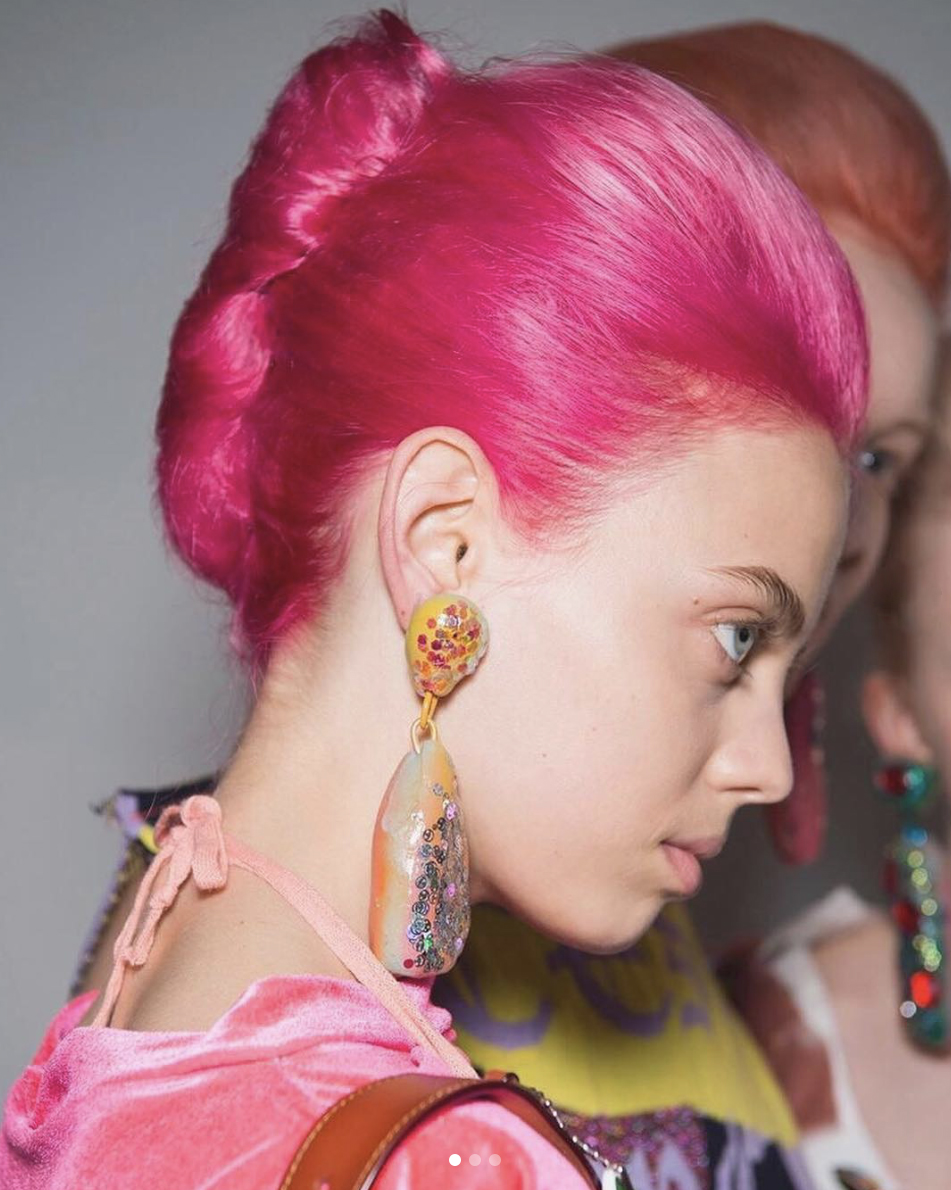 Bright colours have taken the hair world by storm – from Kylie Jenner’s neon locks to Nikki Minaj’s candy wigs. It’s a trend that’s also taken the runway, as observed at Maddy Bovan SS19. For this season’s showcase, Hair Director Syd Hayes fashioned a voluminous, 60’s Mayfair beehive, – with each model sporting a vibrant, rainbow hue. To achieve the desired volume and root lift, Syd used Babyliss Pro’s Ferrari Italia Brava Dryer to blow-dry locks before pin curling sections and pinning at the roots. Next, section clips were removed, with hair brushed through and thoroughly backcombed at the roots. Texturised hair was then brushed backwards to achieve a beehive shape, twisted around the thumb and pinned into place. So extra it hurts. 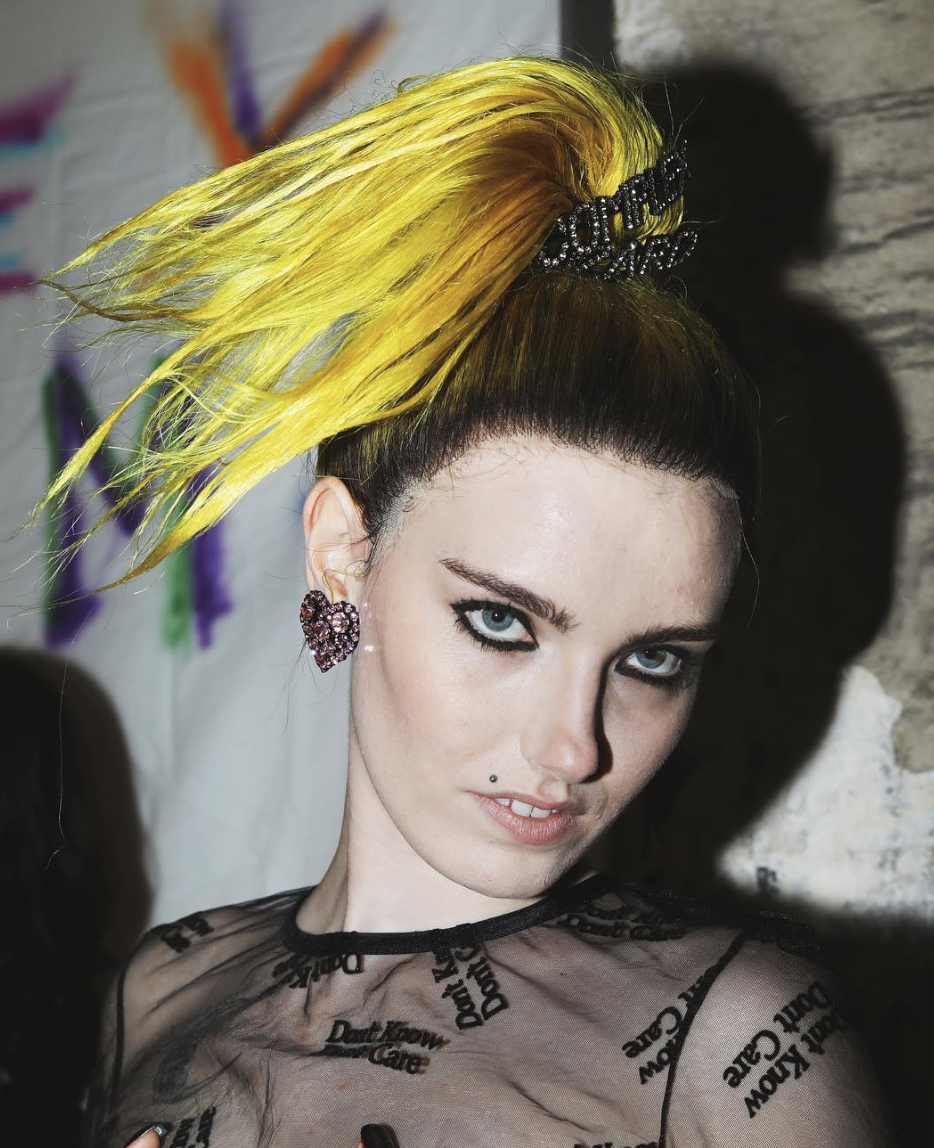 Yet another reiteration of the post-punk theme, the hair look for Ashley Williams was every bit the statement maker. And then some. The look? A series of aptly angsty, goth-inspired ponytails ornamented by striking jewel encrusted phrases (like so). Think vibrantly hued troll hair, meets Cindy Who – with tonnes of attitude. Hair direction was led by London based hairstylist Alex Brownsell and the Black London team, all of whom worked to create a high-octane look to compliment Ashley Williams’ fearless SS19 vision. Talk about hair raising. 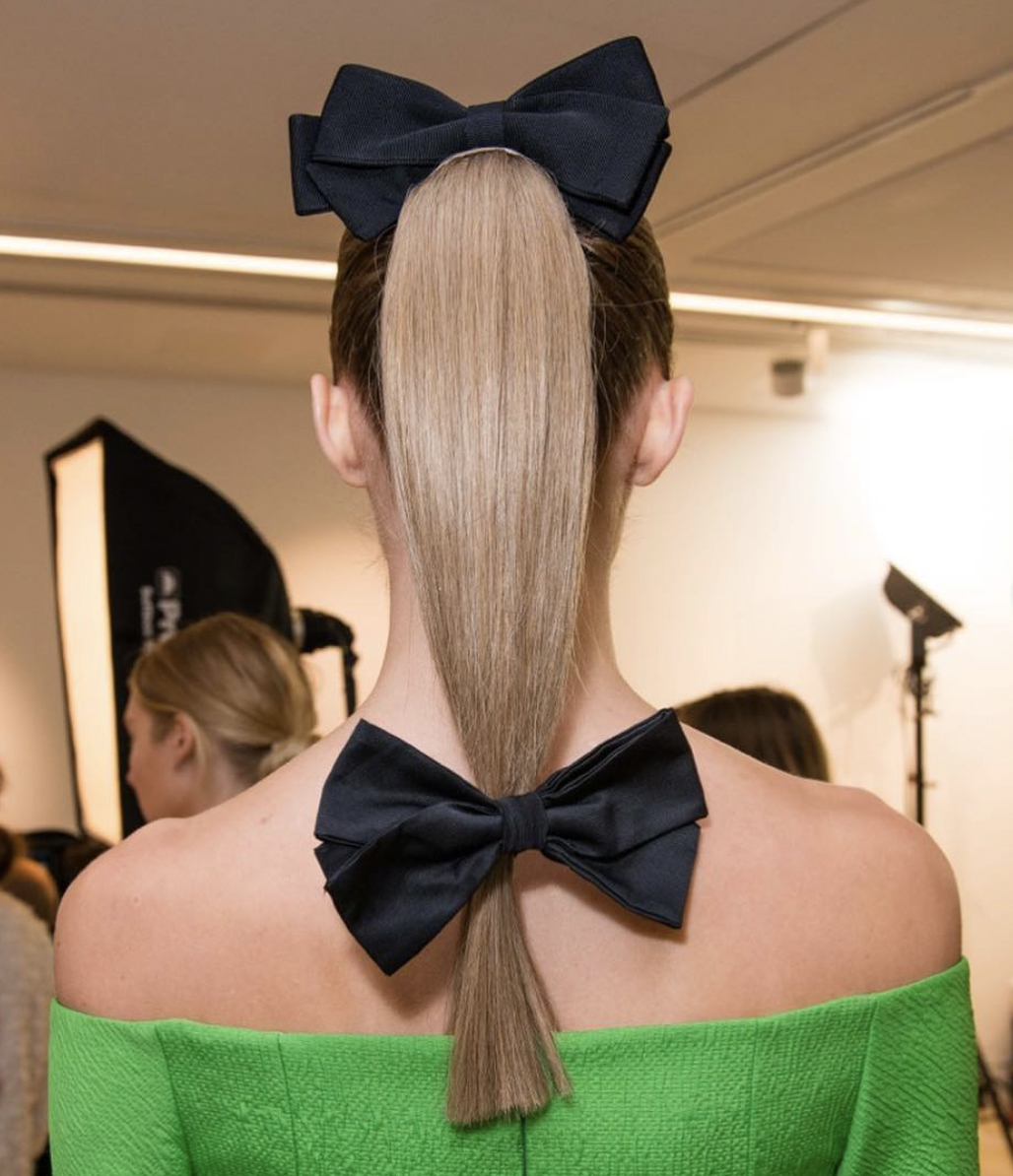 It’s no secret bows have made a comeback, and for this season’s Emilia Wickstead show, Lead Stylist Benjamin Muller more than leveraged the trending accessory – using not one but two bows to create the show’s stunning hero look. “I was inspired by the elegance and strength of women in the 90’s and the high ponytails of the 50’s,” Muller said of his modern take on the classic pony; “Mixing both eras to create a defining modern pony tail”.