FASHION: TOP HAIR LOOKS FROM THE EUROPEAN RUNWAYS (PART ONE)

Following New York’s swathing assault of the hair and fashion spheres… it was time for the European (and respective British) contingent to showcase their creativity. And boy did they deliver. From intricate fringes and braid work to romantic waves and ponytails; this month’s offering brought a host of new, and season defining hair trends to the fashionable forefront… Check out our (non exhaustive) wrap up of the top looks from this season’s London, Milan and Paris runways. The epitome of elegance, sophistication and of course luxury, this season’s Salvatore Ferragamo show was every bit the upscale fashion dream, and in keeping with the brand’s signature aesthetic, lead hair stylist Jimmy Paul created an ultra-modern hair look that juxtaposed both wet and dry textures. He commented, “I was inspired by the architecture of the Milanese urban scenery, and created looks that represented the unceasing rhythms of the city and matched the elegant craftsmanship of the collection.” 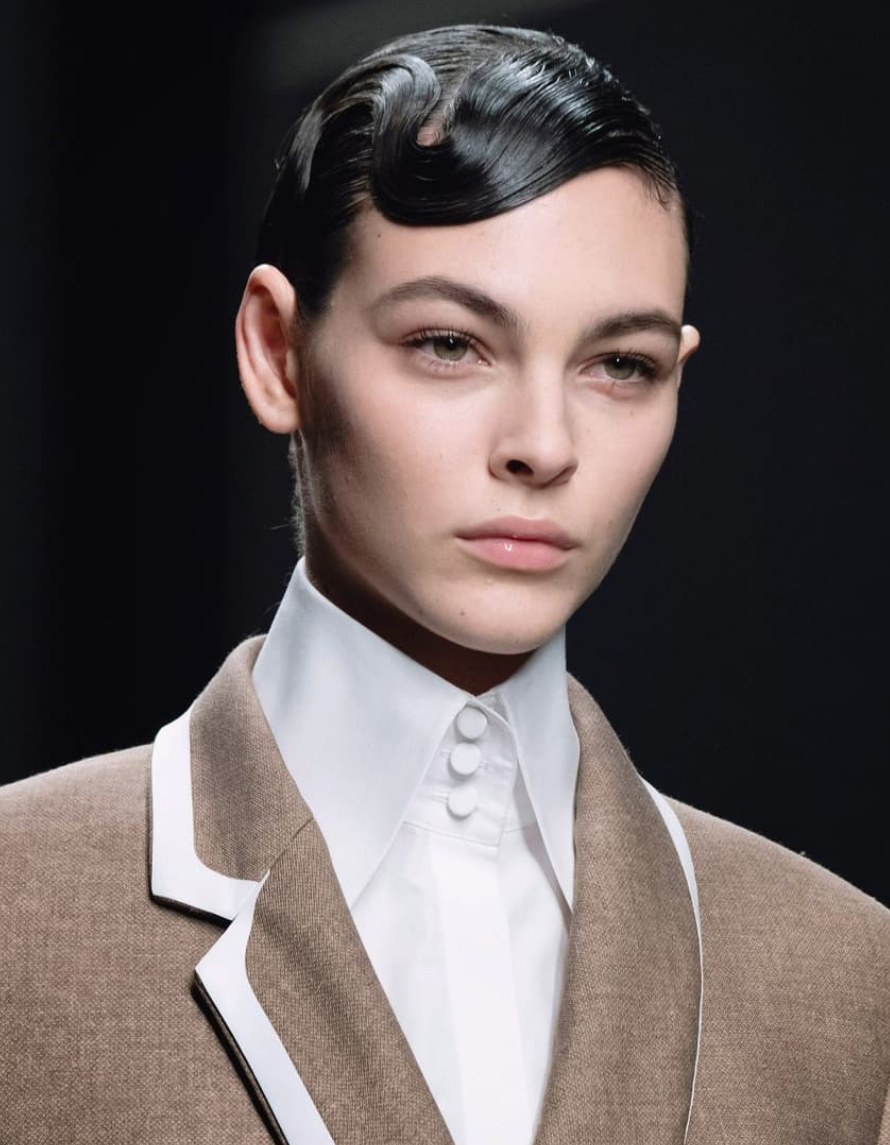 A flurry of fabrics, silhouettes and emotions, this year’s Fendi RTW show was a spirited homage to the design house’s late Creative Director, Karl Largerfield. As such, hair director Sam McKnight sought to capture the essence of the brand, under the designer’s iconic vision, crafting a demure Largerfield-inspired ponytail with a sleek, fringe accent. “The look at Fendi was slick perfection, just as I hope Karl would have loved,” Sam revealed via his instagram. “Thirties waves turned into a river of glossy swirls and twists, a nod to the thirties, tied into a very contemporary natural pony low in the back.” 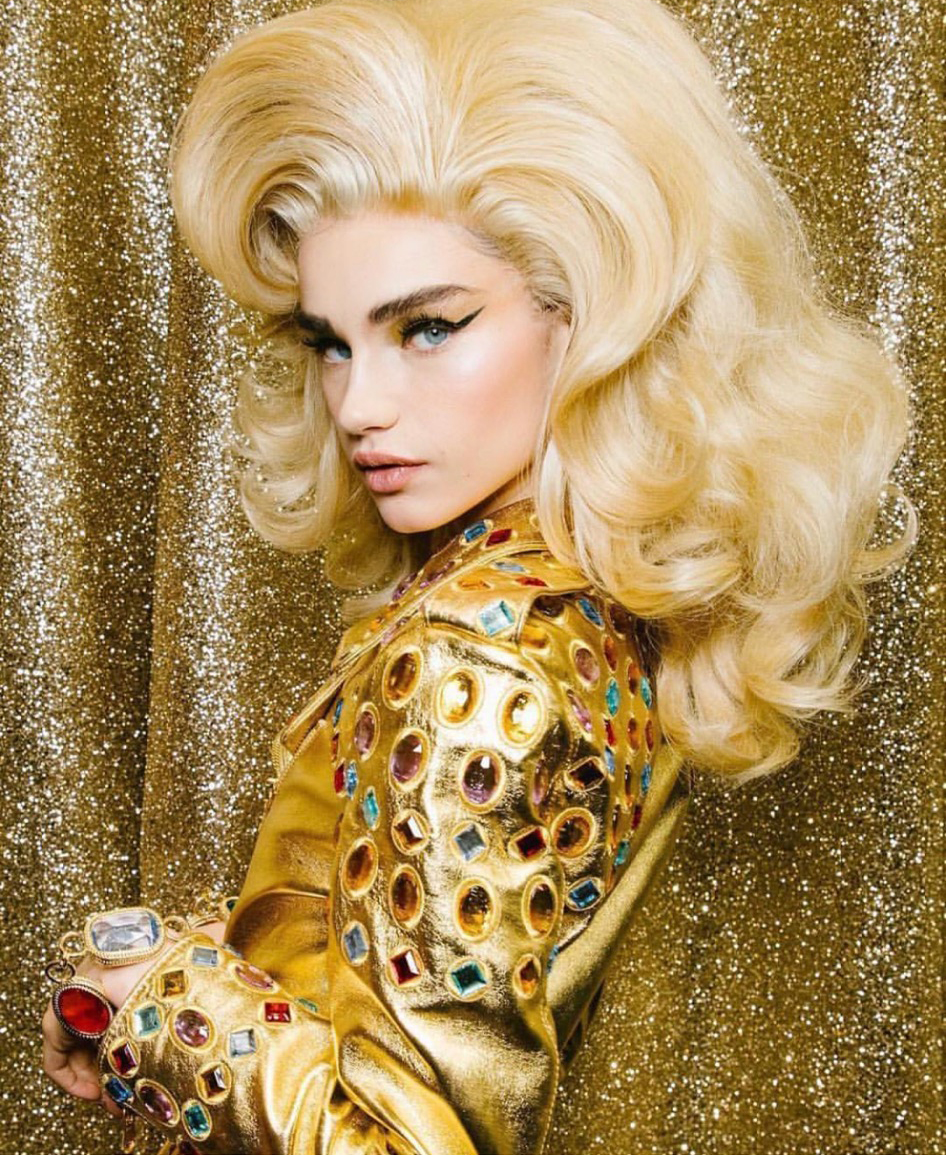 Bigger is (almost always) better… or so the adage goes, and for this season’s Moschino offering, hair director Jimmy Paul took the sentiment more than a couple of hair-inches further, styling high volume, pageant wigs (think Barbarella meets Dolly Parton circa… well, forever) in an array of hues, for each of the show’s models. The epitome of kitsch, this season’s showcase also featured a series of game-show-esque paraphernalia including lavish prize displays and vibrant gambling consoles. “Big and sexy hair became a sort of signature look for me,” said Jimmy, “Three words to describe the hairstyle: funny, sexy, umoristic.” 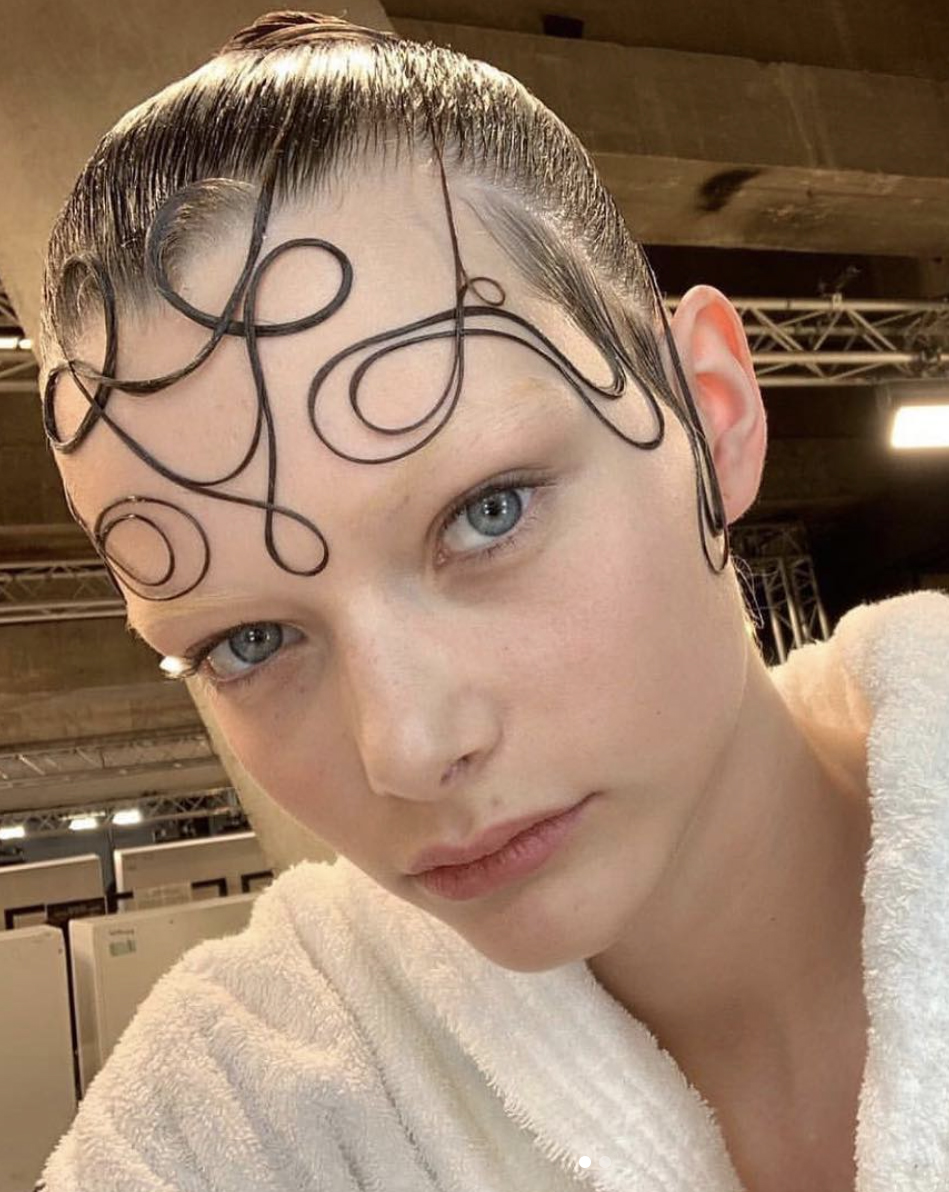 To achieve the (now iconic) art-nouveau hairline swirls seen at this season’s Burberry show, hair director Guido Palau sectioned small front segments using a fine-tooth comb, continuously applying Redken’s Hardware Gel 16 to sculpt the desired shape. “[It’s] a very intricate gelled look, inspired by a much more elaborate version of youth culture,” said Guido. “Gel is my main product, with a touch of Redken Forceful 23 Hairspray to hold [the look in place]”. Male models sported bespoke buzzcuts, with a bangin’ twist; Guido continued, “The fringe being left out is also a nod to the extreme youth culture looks we see.” 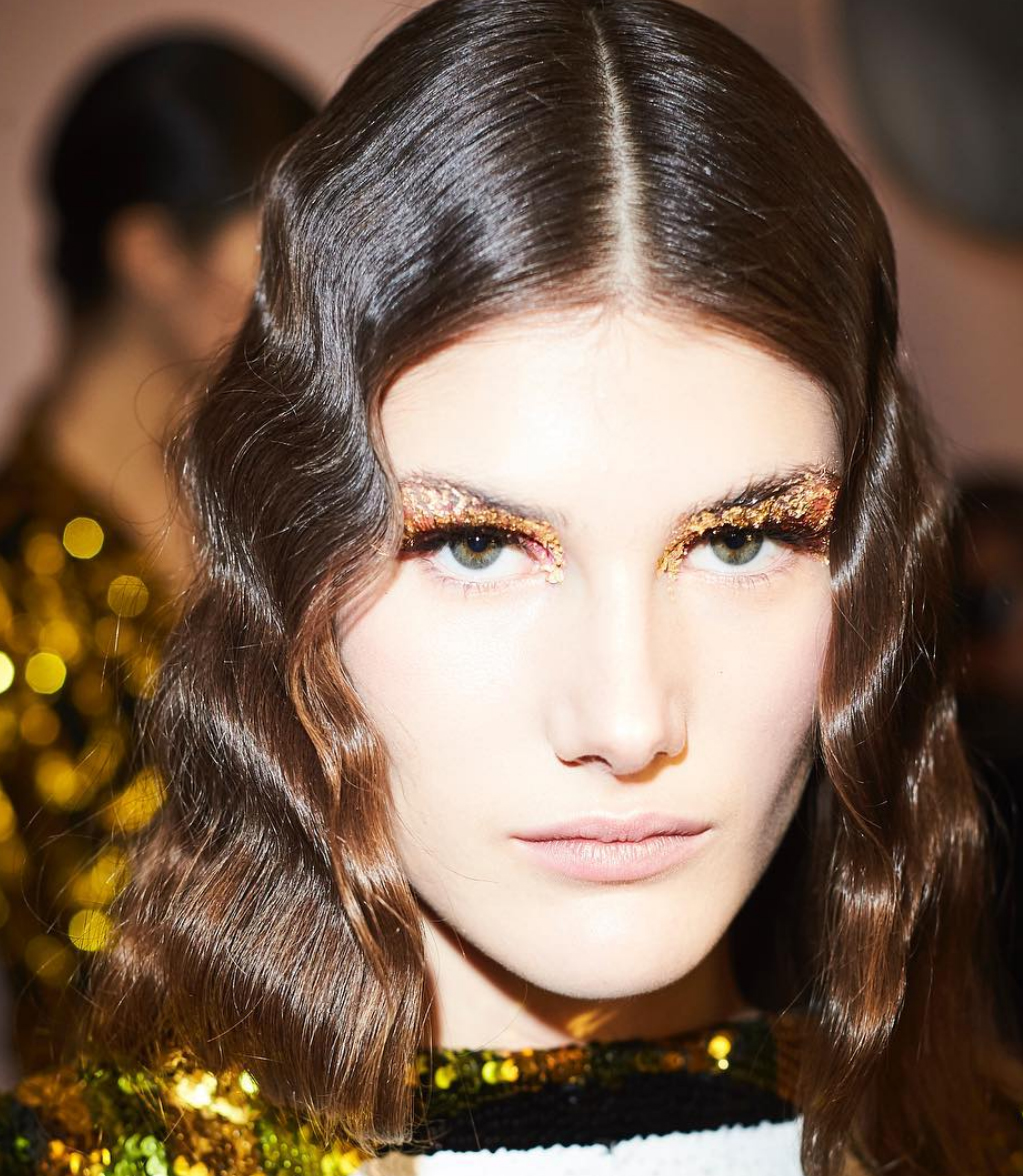 In keeping with the Halpern woman’s (unabashed) penchant for glamour, hair director Sam McKnight styled this soft, high shine hair look on each of the show’s models, combining Pre-Raphaelite-meets-Erté waves with a clean, centre part for balance. To heighten the look’s overall drama, makeup artist Isamaya Ffrench created a captivating, ‘glitter bomb’ eye look that sparkled on the runway; a modern homage to the Studio 54 glamour of yesteryear. And the 80’s nostalgia continues… 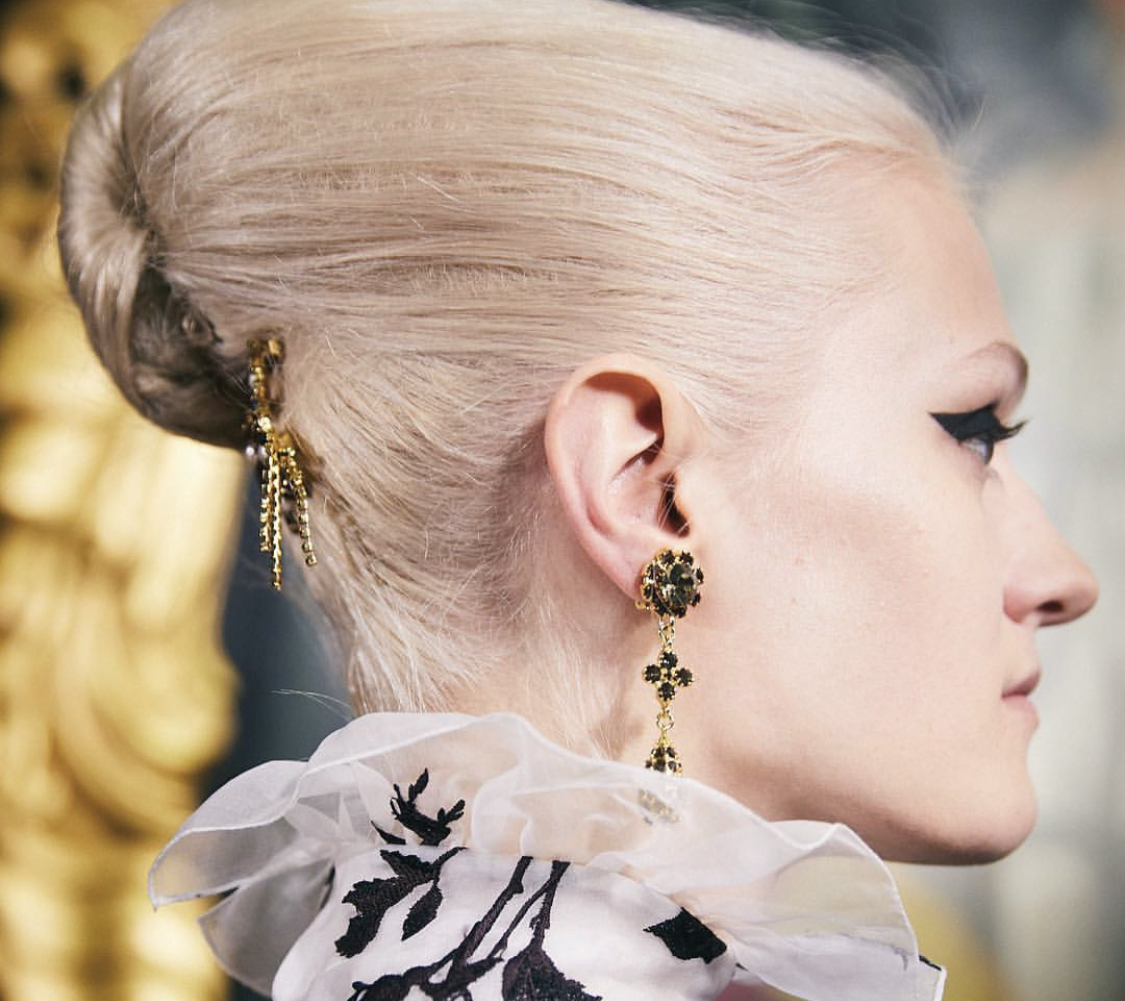 It wouldn’t be a fashion month without at least one variation on the classic beehive… and this season’s offering came courtesy of hair director Anthony Turner, who crafted this sky-high up-do for luxe London outfit Erdem. And beautifully so. Hair was artfully coiffed, twisted and shaped into an elegant, beehive formation, before which the underside was ornamented with assorted, bejewelled accessories. To complete the look, makeup royal Val Garland created a graphic ‘calligraphic’ shadow, using lashings of deep, black liner. 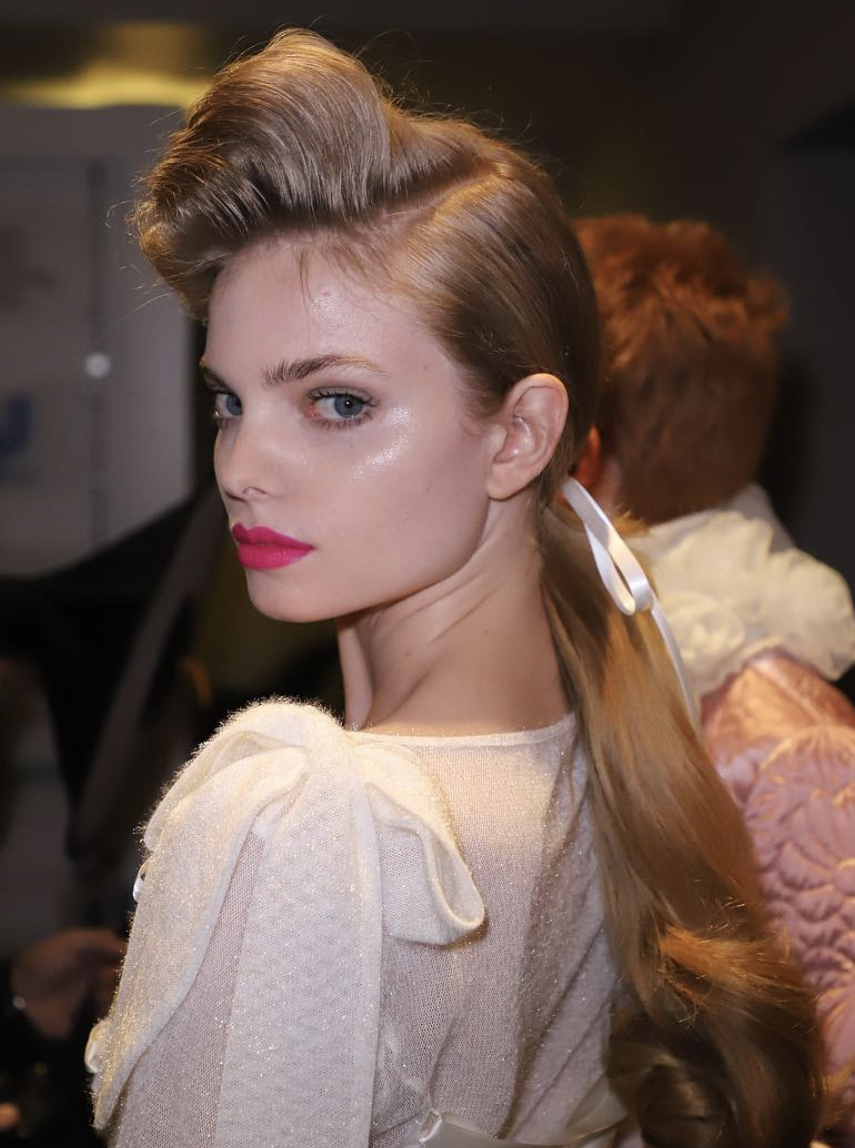 For this season’s Prada runway, hair director Guido Palau crafted three distinct hair looks that were alternated across models: the bob, the ponytail, and of course, the dual braids (pictured). “The whole show concept is a ‘dark romance,’ with a nod to a gothic-y kind of girl with the braids,” said Guido. “There are [also] references to the 20’s but then we also have some simple middle-parting ponytails with the accents of these extreme looks. The combinations of the looks makes them stand out, which is very Prada; as a subversive idea of beauty.” Wednesday Adams meets school-girl-chic. The hair brief for Missoni FW 2019? Clean, graphic and rigorous: with an aptly modern twist. Hair was swept into neat, low ponytails, before which extensions were applied to achieve faux bangs or exaggerated sideburns. “I wanted a sleek look, elegant, even a bit ‘androgynous, to highlight and complete this extraordinary collection with a sartorial taste,” said hair director Anthony Turner. “The challenge was to combine the rigor with glamourous healthy and lush hair: an effect obtained thanks to the use of extensions and Moroccanoil products”.