For those of the sartorial persuasion, the arrival of February can only signal one thing: Fashion Month. Kicking off with our friends in the big apple, this season’s Fall/Winter offering was every bit the week-long fashion soiree… as models, stylists and members of the it-crowd brought their signature magnetism to the streets of NYC. Backstage, our hairdressing heavyweights were on hand to sprinkle ample lashings of stardust, ensuring each show’s representatives were suitably runway ready. Here’s our favourite hair moments to have emerged thus far. 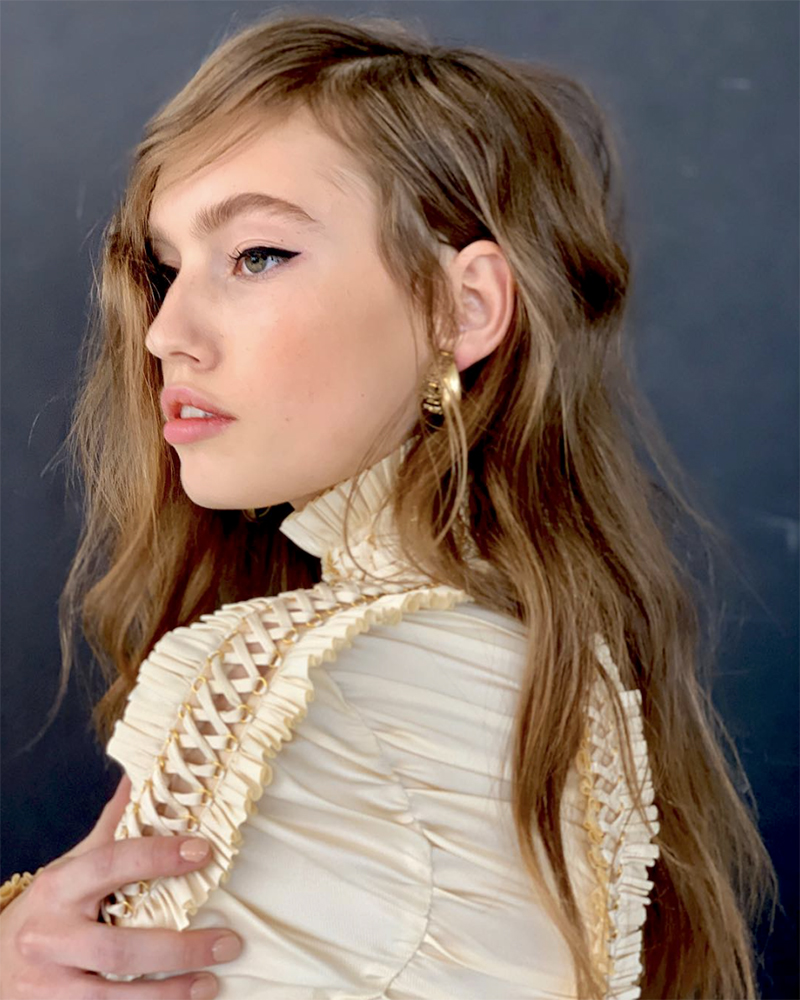 It-girl waves with an under cover twist. A look that transcends the runway; as is the Xydis way. “We created this in the hair style by setting a vintage-style side parting and amodernised take on the classic ‘finger wave’,” said Renya. “Where finger waves are classically tight and slick, we added texture and movement to [capture] Zimmermann’s trademark effortless glamour.” 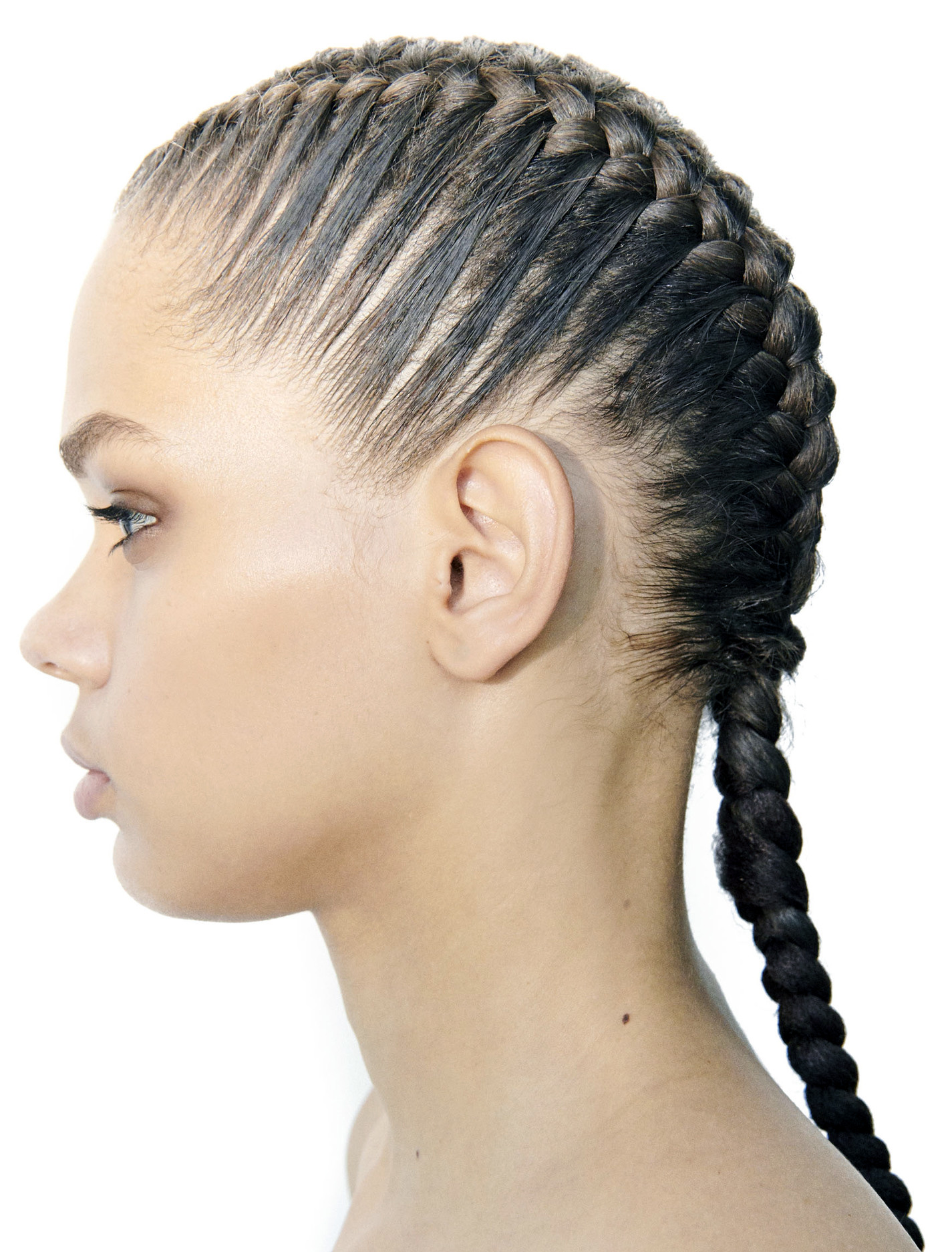 The look for Tory Burch FW19: futuristic braids, with a high-shine finish. “Tory is all about classics with a twist,” said Guido. “At Tory’s show, a normal length braid didn’t feel enough, so adding the hair extensions and making it super long gave a futuristic, avatar feel, but there was still a classic-ness to it.” Guido at his braided best. 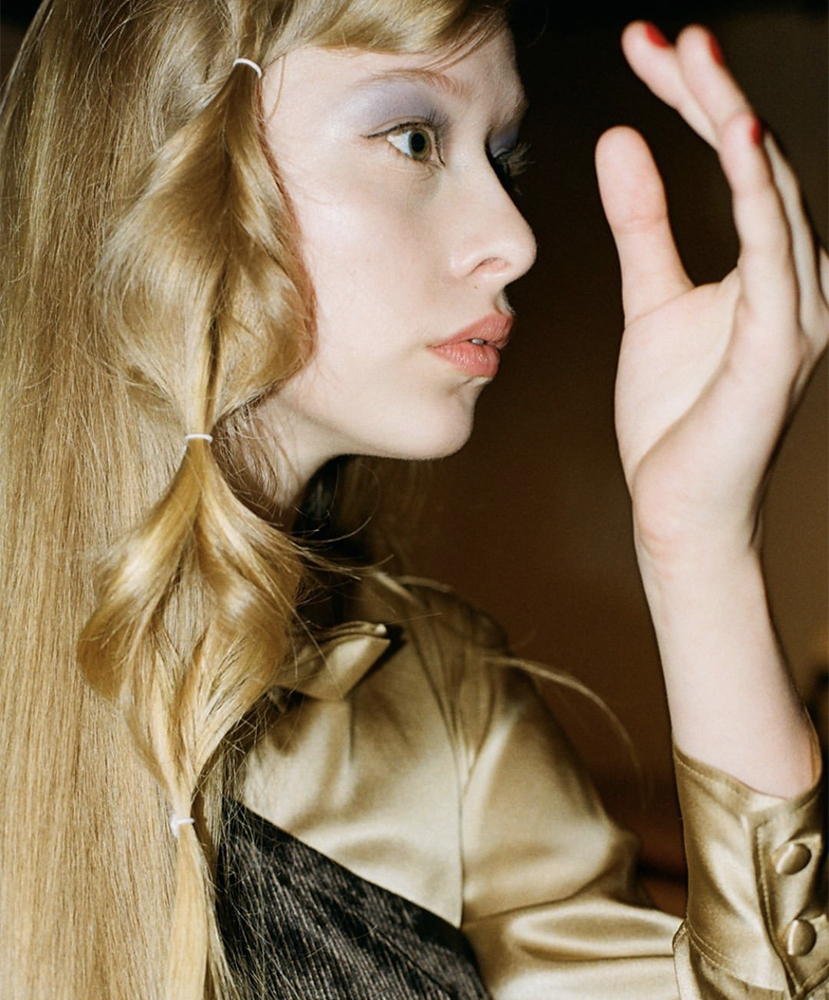 A millennial take on a school girl classic. Simple, beautiful and uber wearable; we love this soft hair look for the Maryam Nassir Zadeh AW19. 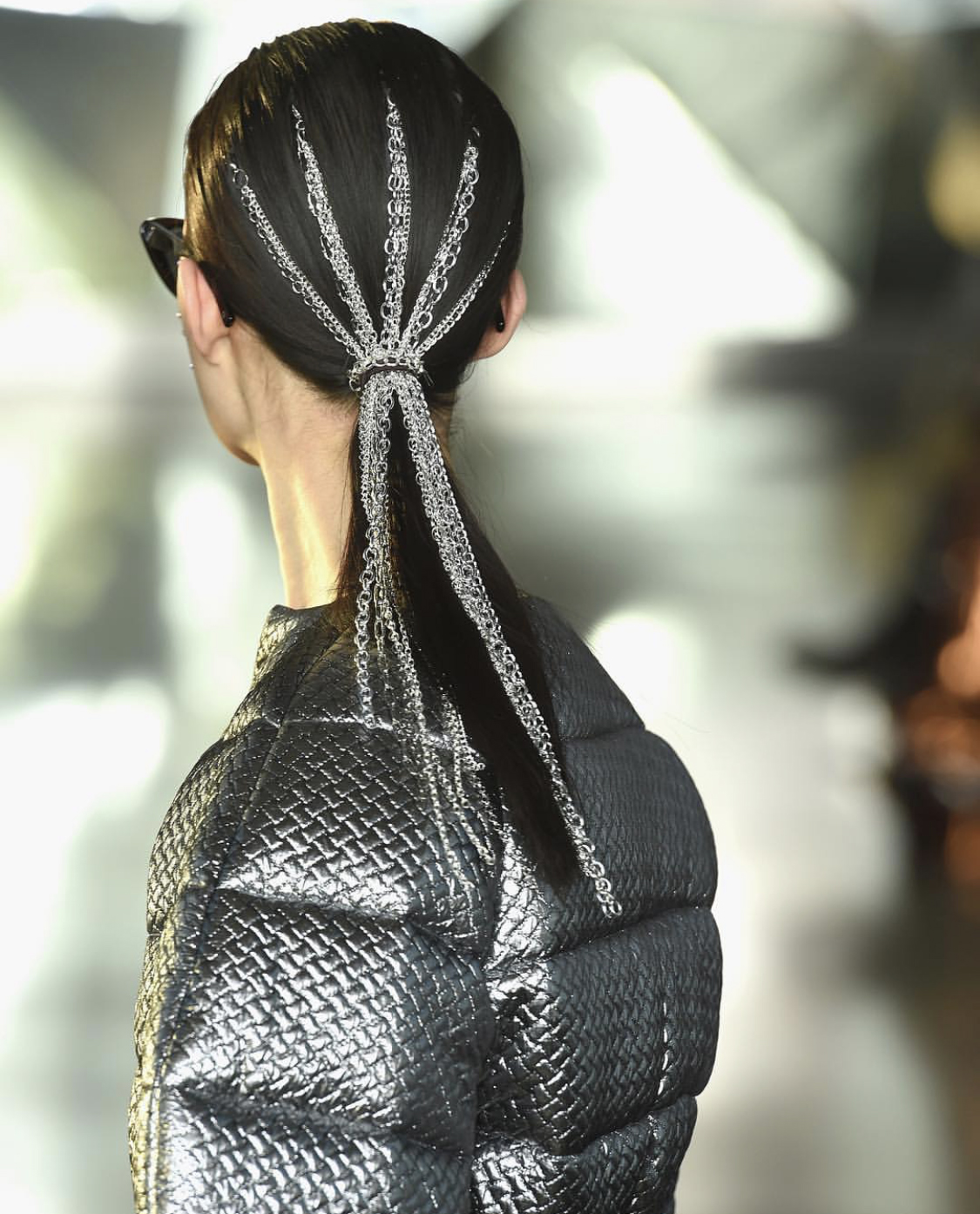 In today’s hair climate, accessories are not only an option, they’re a must… and for this season’s Christian Siriano show, hair director (and mane addict) Justine Marjan took the trend one step further, adding delegate chain details to this sleek, low pony. 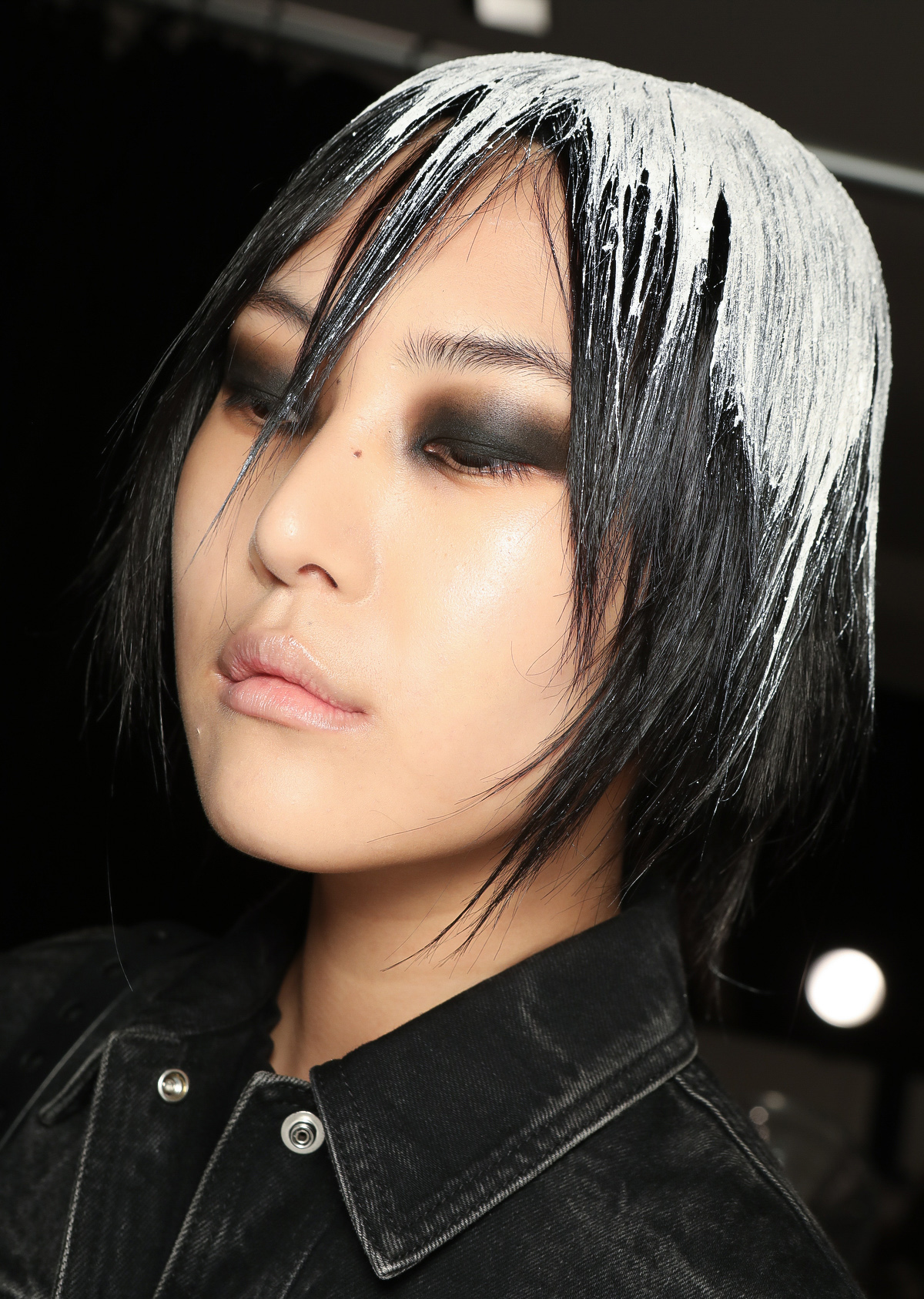 To create the look for Jeremy Scott, Hair Director Eugene Souleiman focused on three key themes that epitomised Scott’s FW19 collection: monochrome, asymmetry and the manipulation of materials. Short black wigs were erratically cut for an asymmetrical appearance, before which roots were covered with a thick, white paint that was brushed through the lengths. 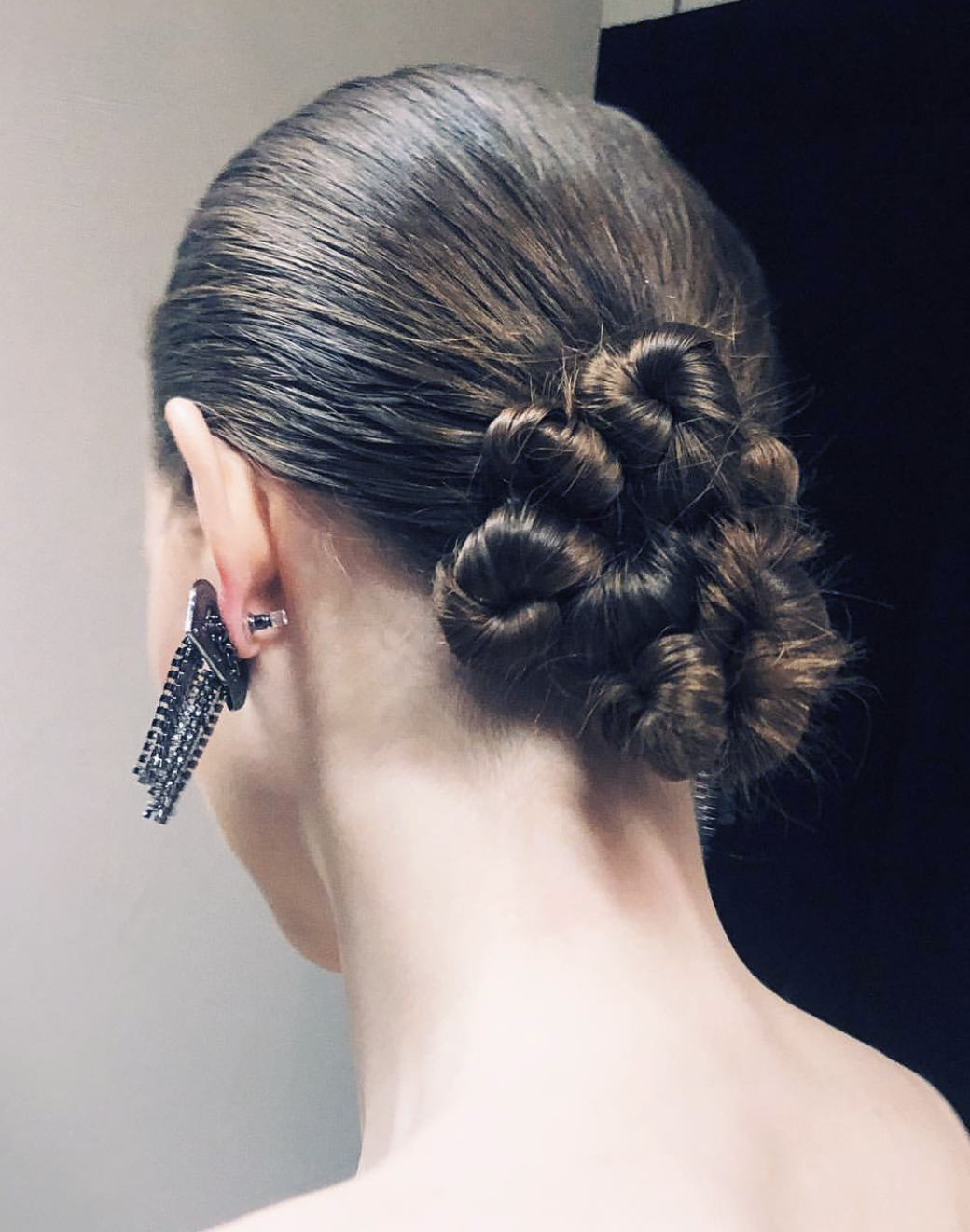 The epitome of elegance, the look Bob Recine created for Brandon Maxwell FW19 was dubbed the “Supersonic Ballerina”, and perfectly complimented this season’s sophisticated garment selection. 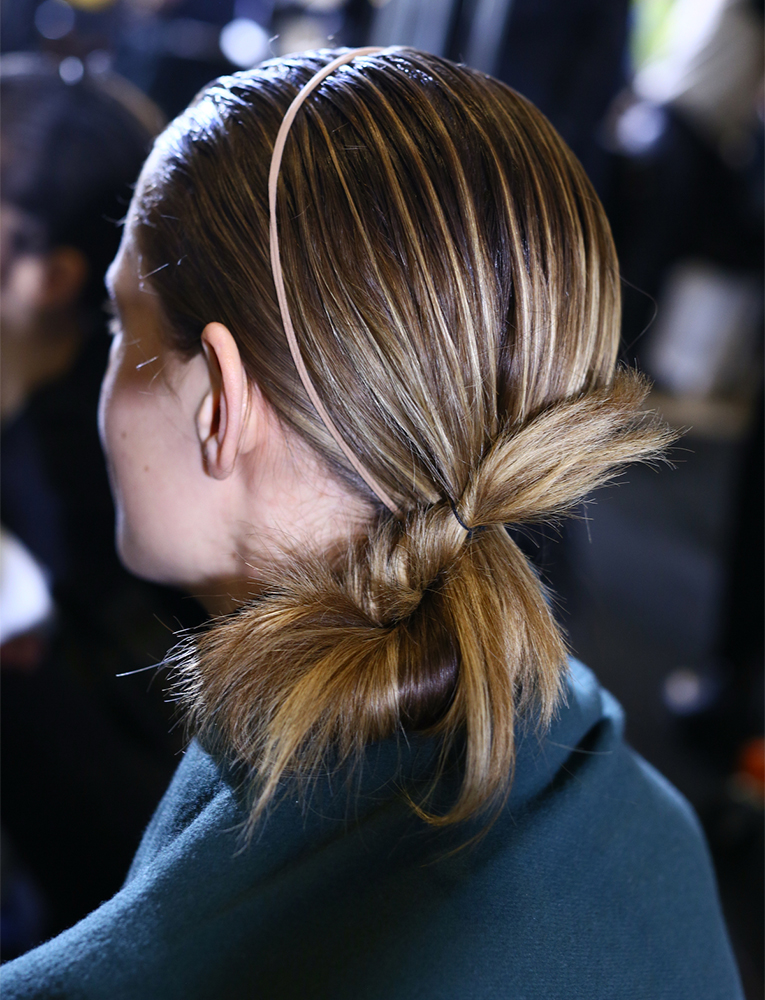 A look that personifies the strength, spirit and sophistication of today’s Dion Lee woman, hair director Eugene Souleiman crafted this modern take on the classic chignon for the designer’s AW19 offering. “When it came to creating the hair looks, I didn’t really think about the collection,” said Eugene. “I thought about the girl who would be wearing those clothes… who the collection was designed for… that was my inspiration.” 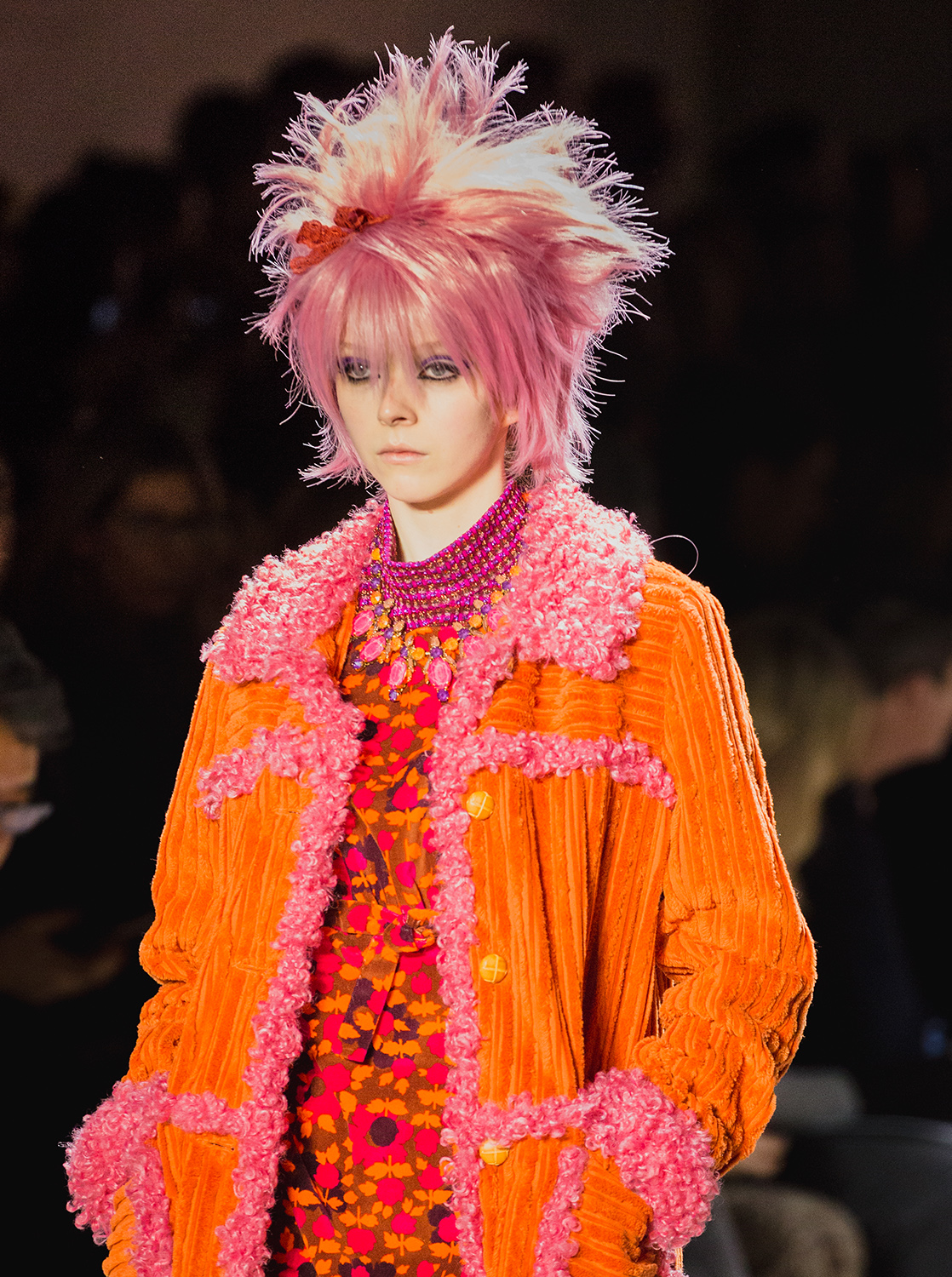 The brief for Anna Sui? Punk girl glam. “It’s called lady goes punk,” said hair director Garren. “The clothing was very lady-like, while we made the hair have this contradictory Motown feeling. We took the hair the complete opposite direction of the clothes by going punk and incorporating multiple colored wigs in pink, lavender, blue, turquoise, green and purple.” 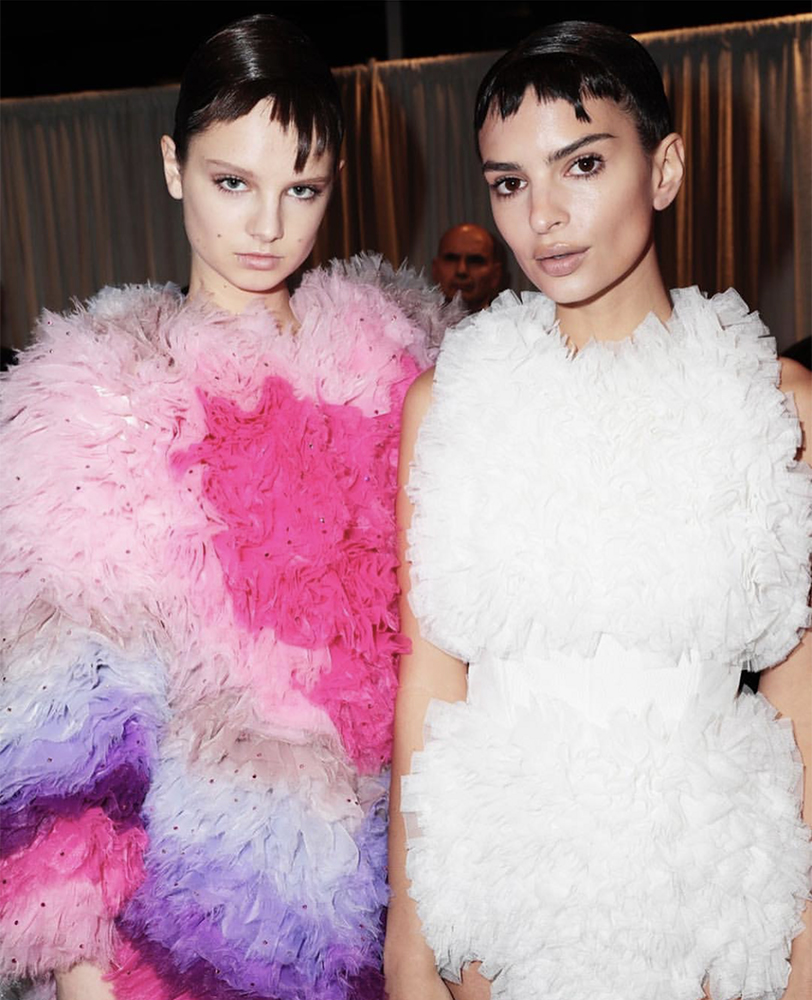 Fake bangs… with a hint of fabulosity. “[For Tomo] we did a head wrap with a fake bangs,” said hair director Guido Palau. “My main product was Redken’s Forceful 23, so when I wrapped the hair around the head, it gave it a high gloss, high hold to it. Before doing the wrap, I placed one row of wefts – cutting a very short, jagged bang to give the very simple, almost elegant shape an edge.” Guido knows best.