Good news for those of the sartorial propensity.. Fashion Month is officially herrrrrre. Kicking off with NYC’s ever-trend-savvy contingent, the crazy/cool style crowd – think models, designers and hairstylists (oh-my) – have come out to play, signalling the start of FW18’s seasonal festivities. We’re ready. 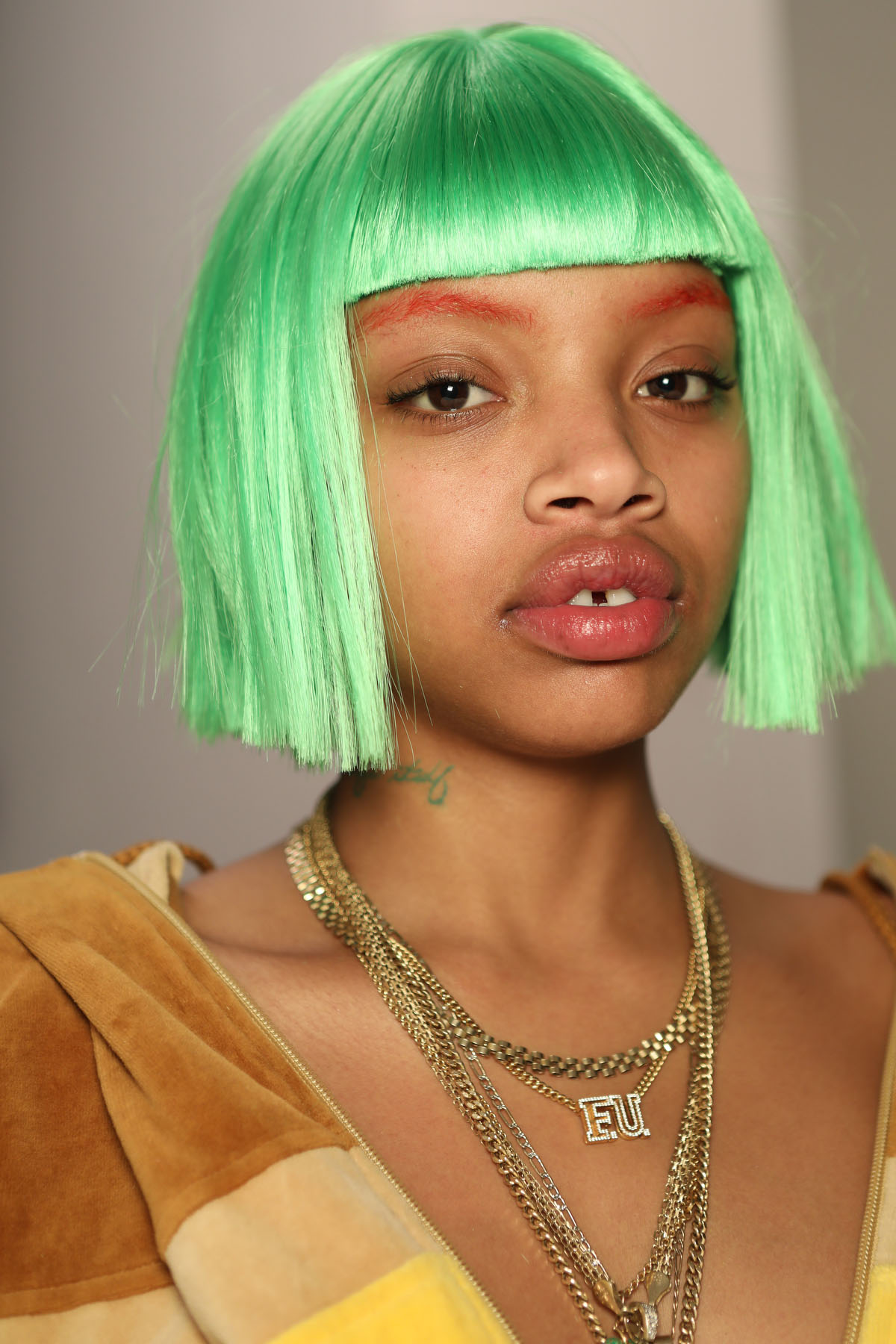 All of our coloured fantasies came to life at Jeremy Scott FW18, as the master himself, Eugene Souleiman led a Wella + ghd strong hair team in styling these blunt, bob wigs in a range of saccharine hues. Candy anyone?

“The aim today is to get the hair to look as glossy and sharp as possible, almost fake looking. There’s a strong synthetic feeling running through Jeremy’s collection and we are taking that and very much running with it.” 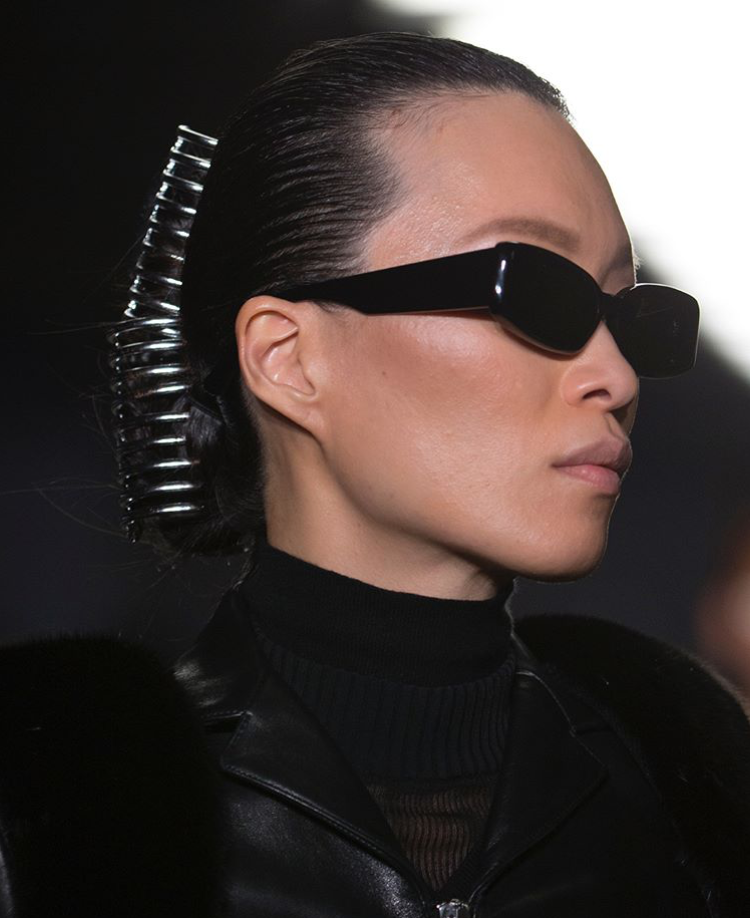 This just in.. not only are scrunchies and ribbons again making the rounds, but so too is the trusty Banana Clip, as observed at Alexander Wang FW18.

“This is Alexander Wang’s take on the 80’s power woman, when we first saw female empowerment in the office. The hair is sort of an ironic take on that power woman with the inclusion of the custom-made Alexander Wang silver banana clips.”

“It feels young, with a slight irony to it. The shine and hold from Redken Forceful 23 hairspray gives it a strong and chic vibe.” – Guido Palau 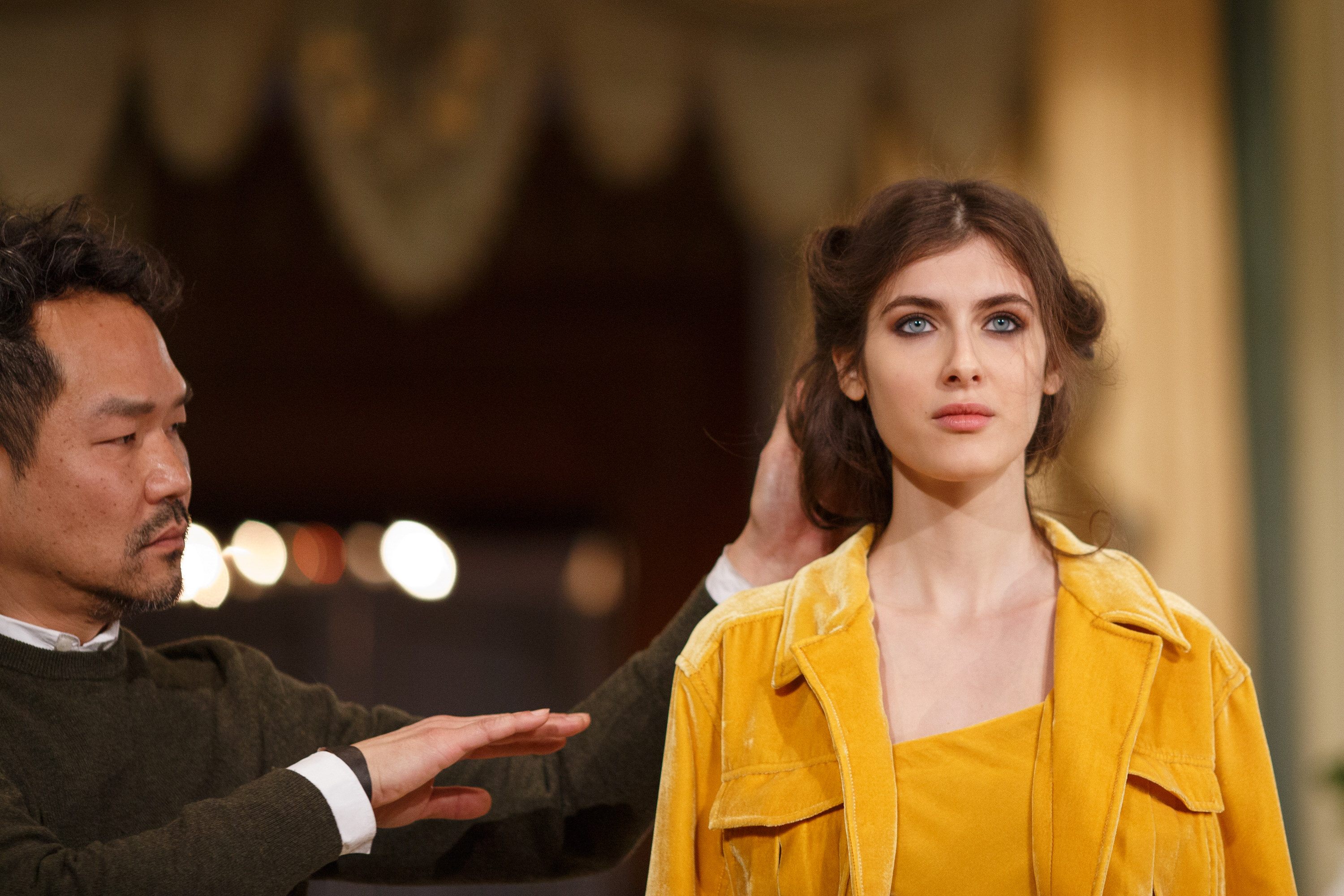 Hair was first prepped using Oribe’s Foundation Mist, Supershine Light Moisturizing Cream and Grandiose Hair Plumping Mousse for texture, and curled in alternate directions to create an undone, relaxed look. Oribe’s Swept Up Volume Powder Spray was next dusted over tresses for a matte finish, before 2-inch crown side sections were loosely twisted, and pinned above the ears. Très Jolie. 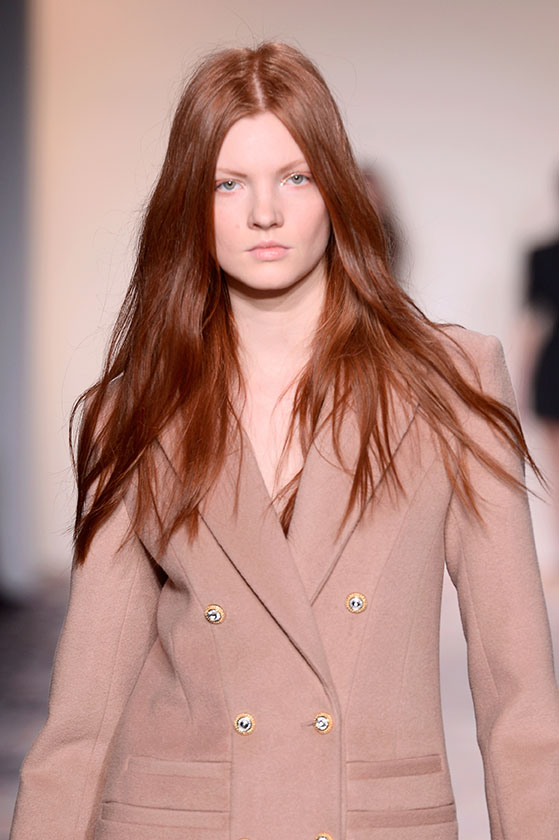 Queens of whimsy Alice McCall once again dropped the goods for their NYFW debut, offering everything from art nouveau florals to glistening ruched tulle. Think chic femininity meets 80’s bourgeois power dressing – with a touch of rock and roll glam.

On hand to style models’ aptly femme tresses was none other than guest artist for Wella Professionals Keiran Street: “This look is all about silent texture. The Alice girl is a cool, uncomplicated woman. She is strong with a rock and roll edge – her vibe is effortless.”

“We wanted to create something feminine, yet edgy – and achieved the look through loose, large and thick waves rested upon strong shoulders and plunging necklines.” 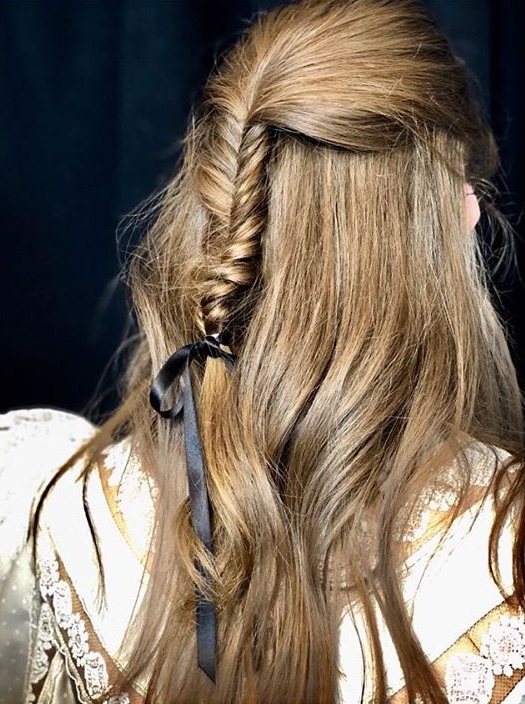 Show me a girl who hasn’t swooned over Zimmerman’s luxe version of modern femininity.

In adhering to the brand’s signature sensuality, this season’s offering – titled ‘Unbridled’ – drew cues from the Victorian era, presenting a womanly muse who finds freedom in her oppressive surroundings (how fitting). 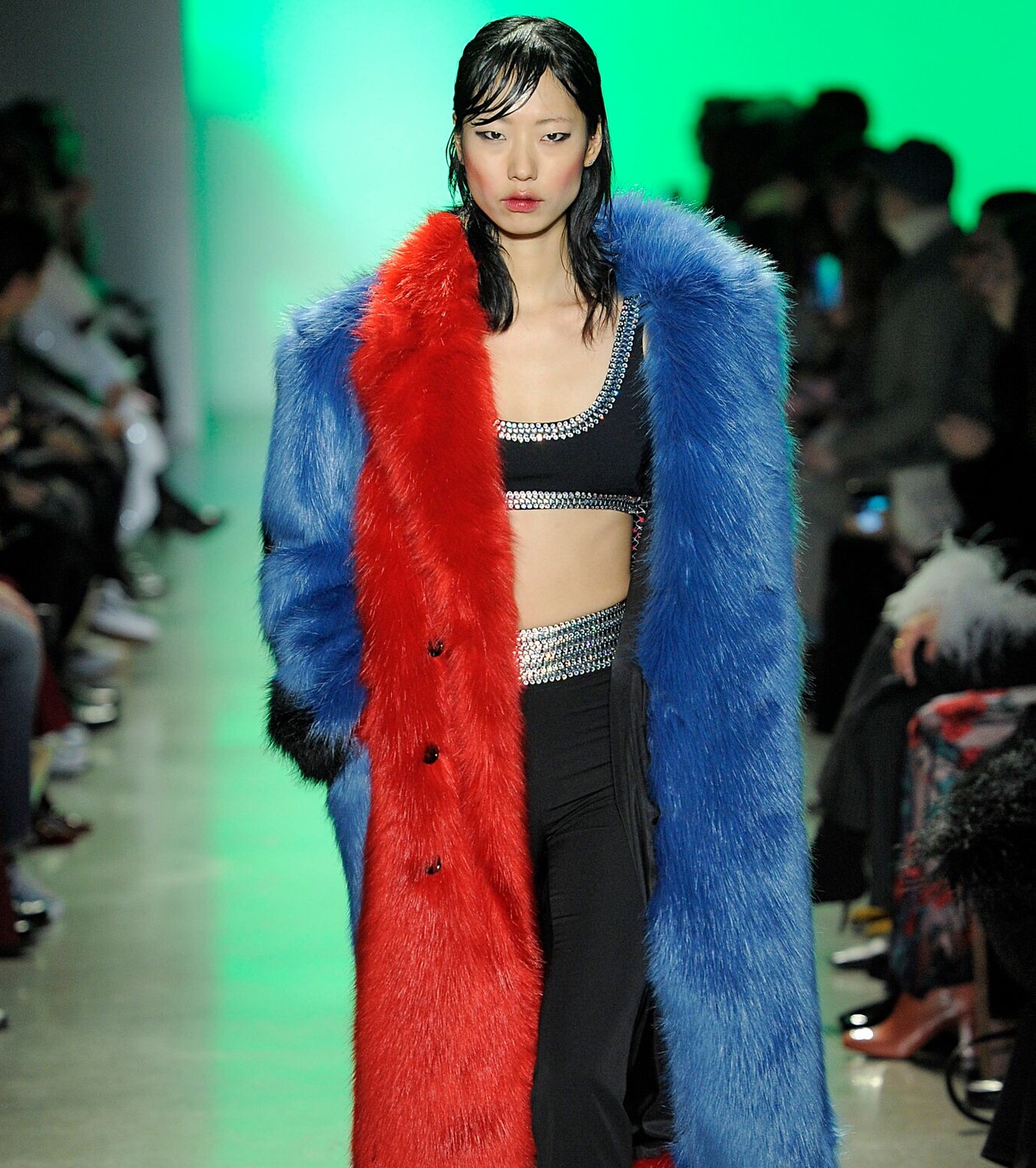 The look saw tresses matted, and flattened down (get the look using Oribe’s Maximista Thickening Spray, Sculpting Cream, or Surfcomber Tousled Textured Mousse) with a front swoop for extra drama. 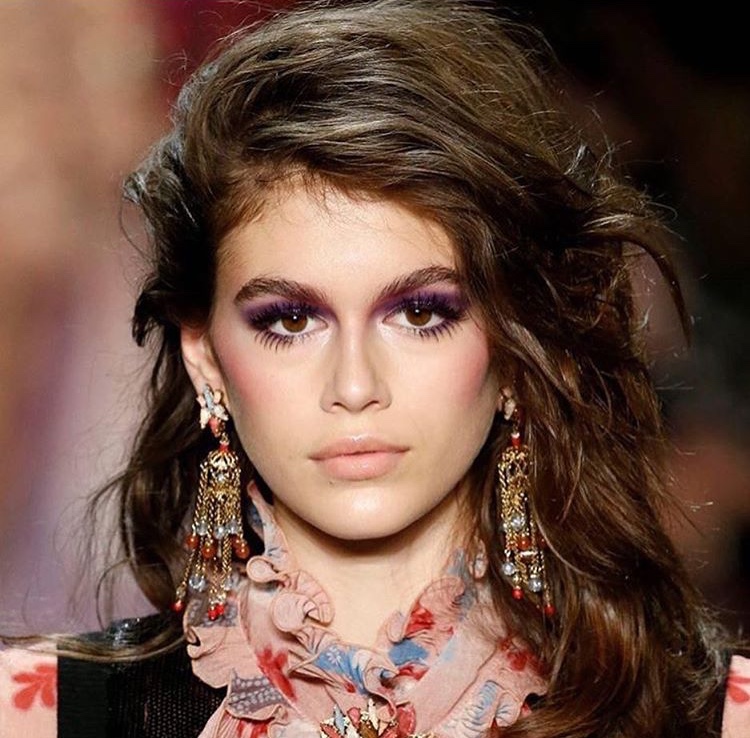 In keeping with this season’s ‘back to the 80’s’ furor, Co-Founder of R+Co Garren revived the iconic Mudd Club flip (à la peroxide Madonna) transporting the mod millennial set to undergrounds bygone.

“We’re taking the hair and bringing it into an 80’s world where it has lots of texture at the scalp and on the top. And then once we’ve built the texture, we gave some girls bangs by bringing the fringe across the forehead.”  – Garren

For anyone needing further convincing, here’s a shot of Cindy Crawford’s offspring sporting the flip. This. Is. Everything.