Working with Romance Was Born is (much like the collection) a dream for me. Anna and Luke’s creativity and openness towards design allows me to be experimental with the hair styling. For tonight’s show, we channeled ‘goddesses’ across multiple looks, using a spectrum of EIMI styling products and of course, glitter. All of the glitter. 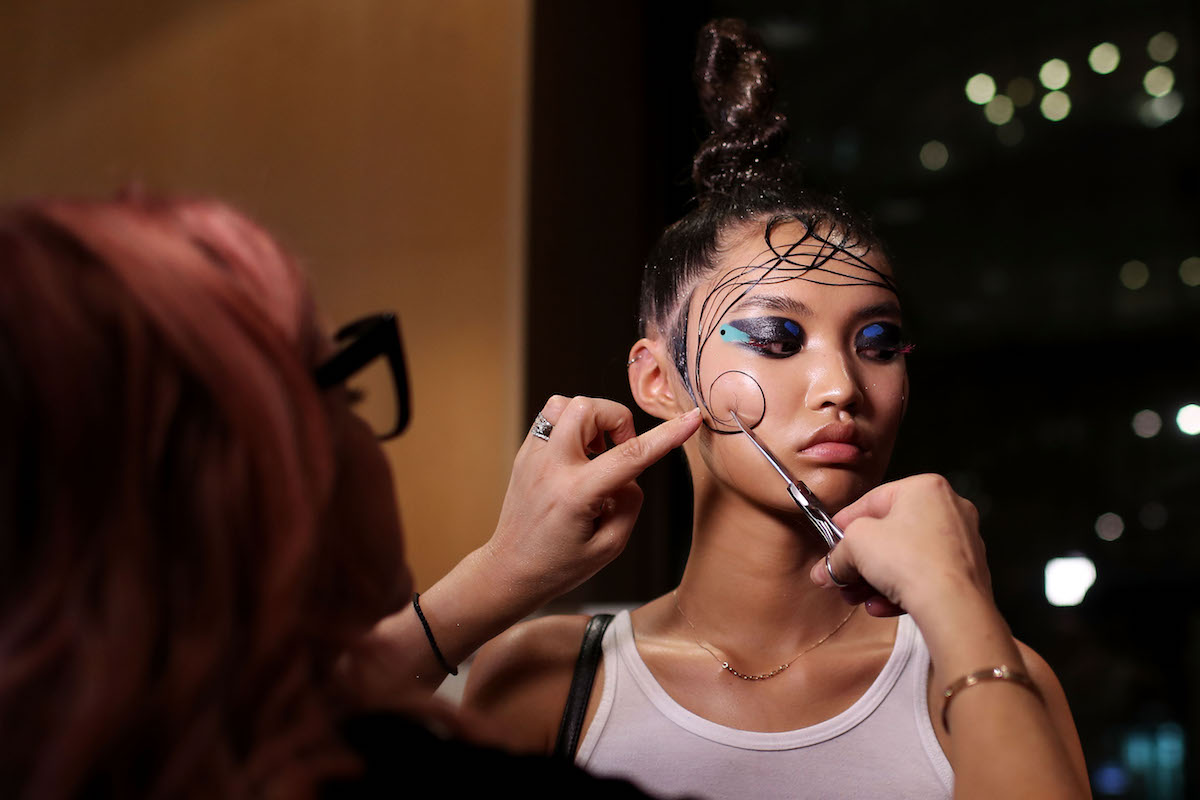 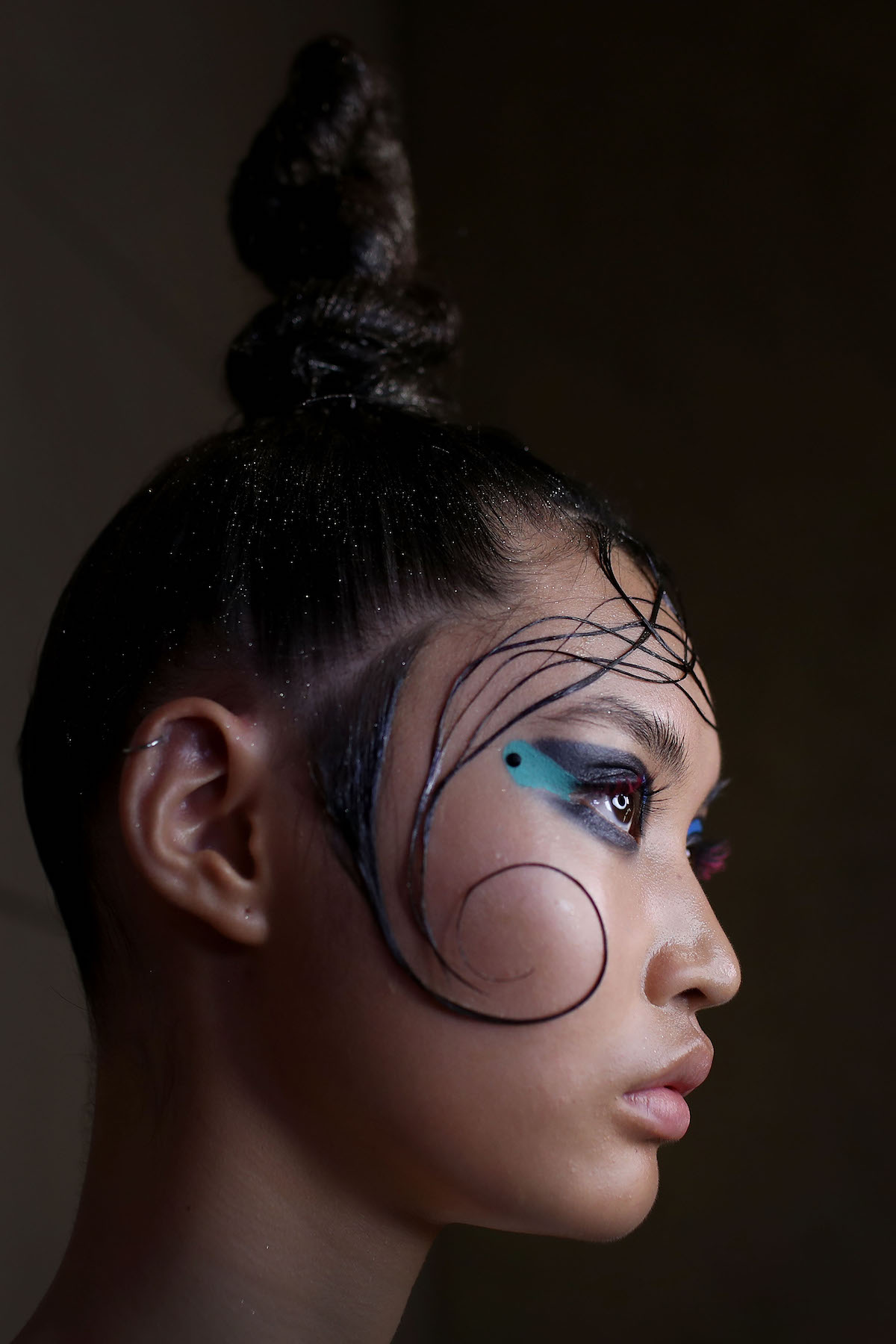 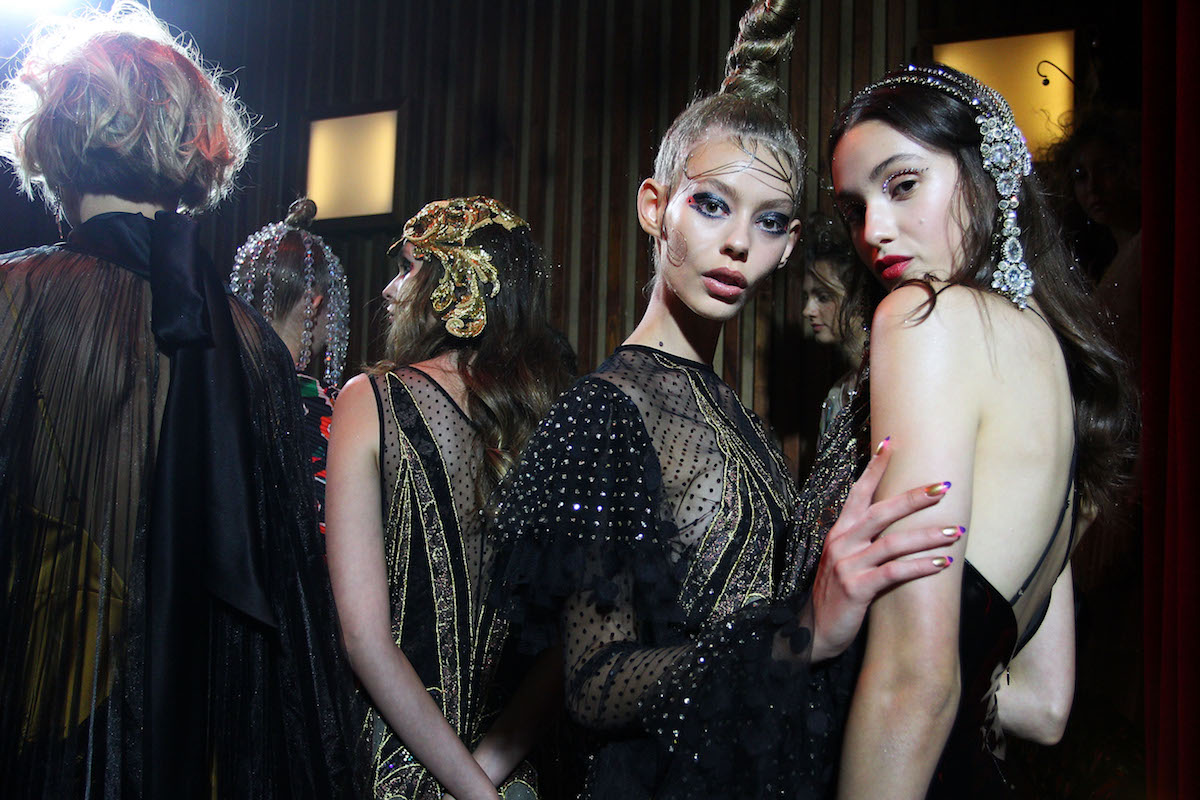 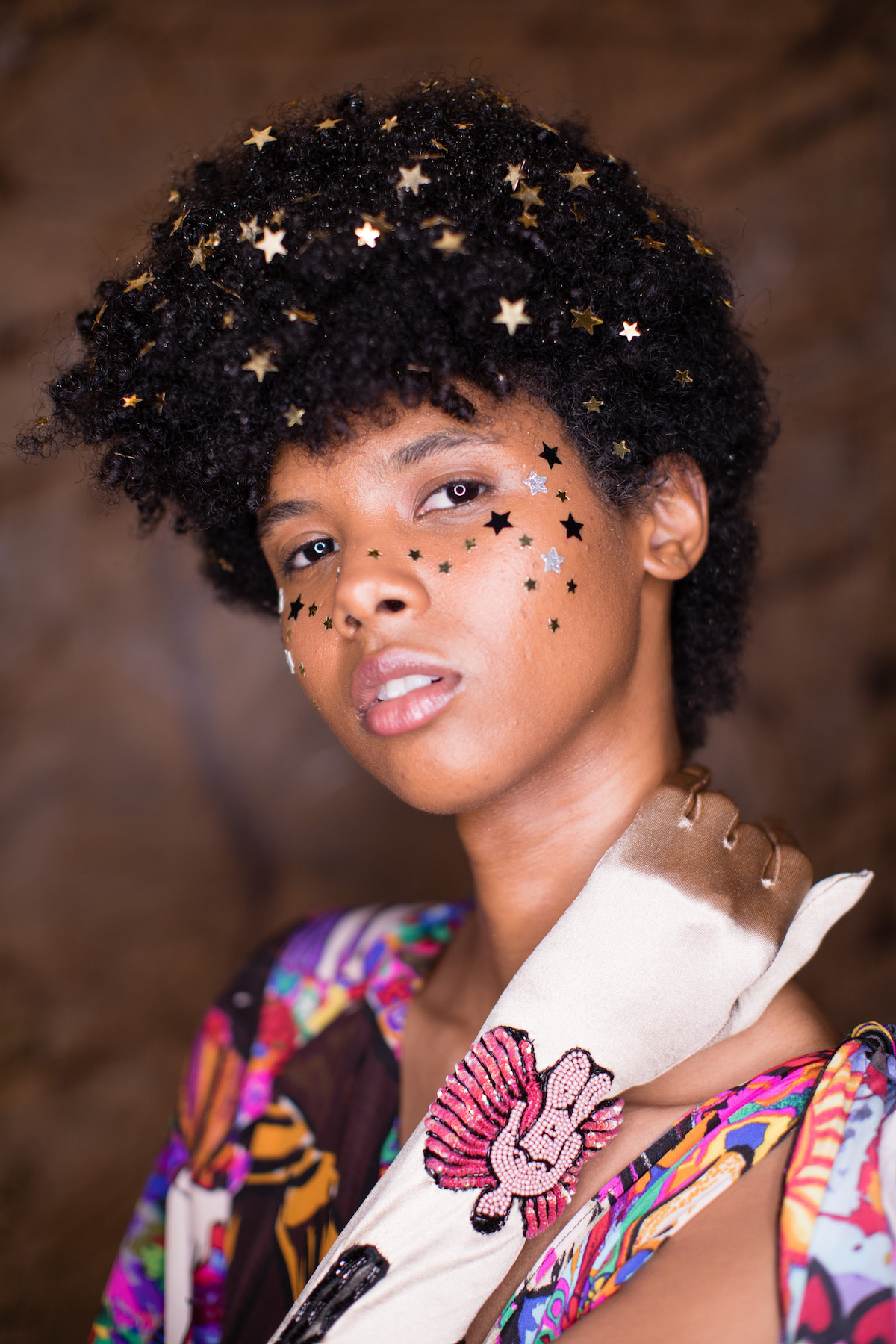 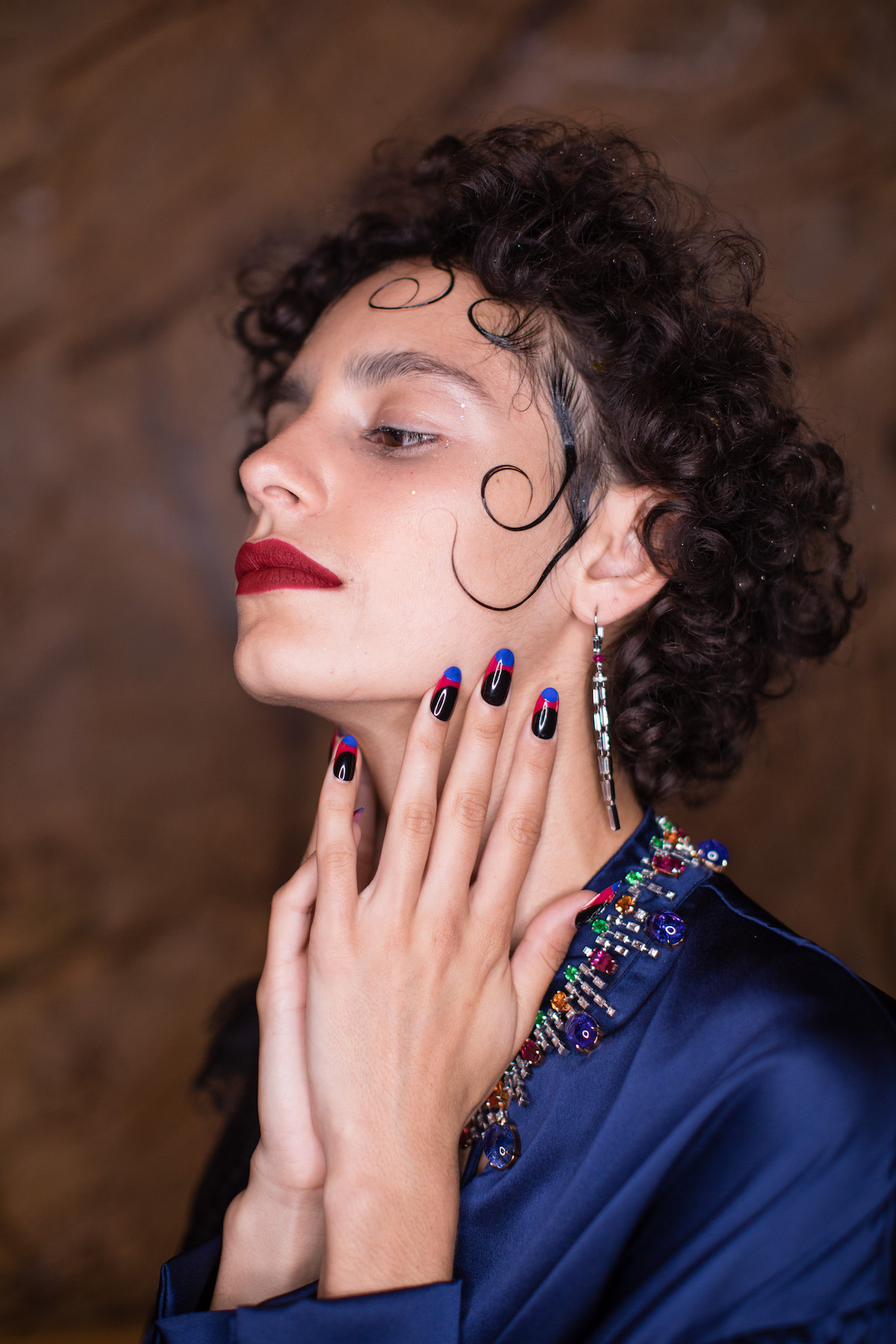 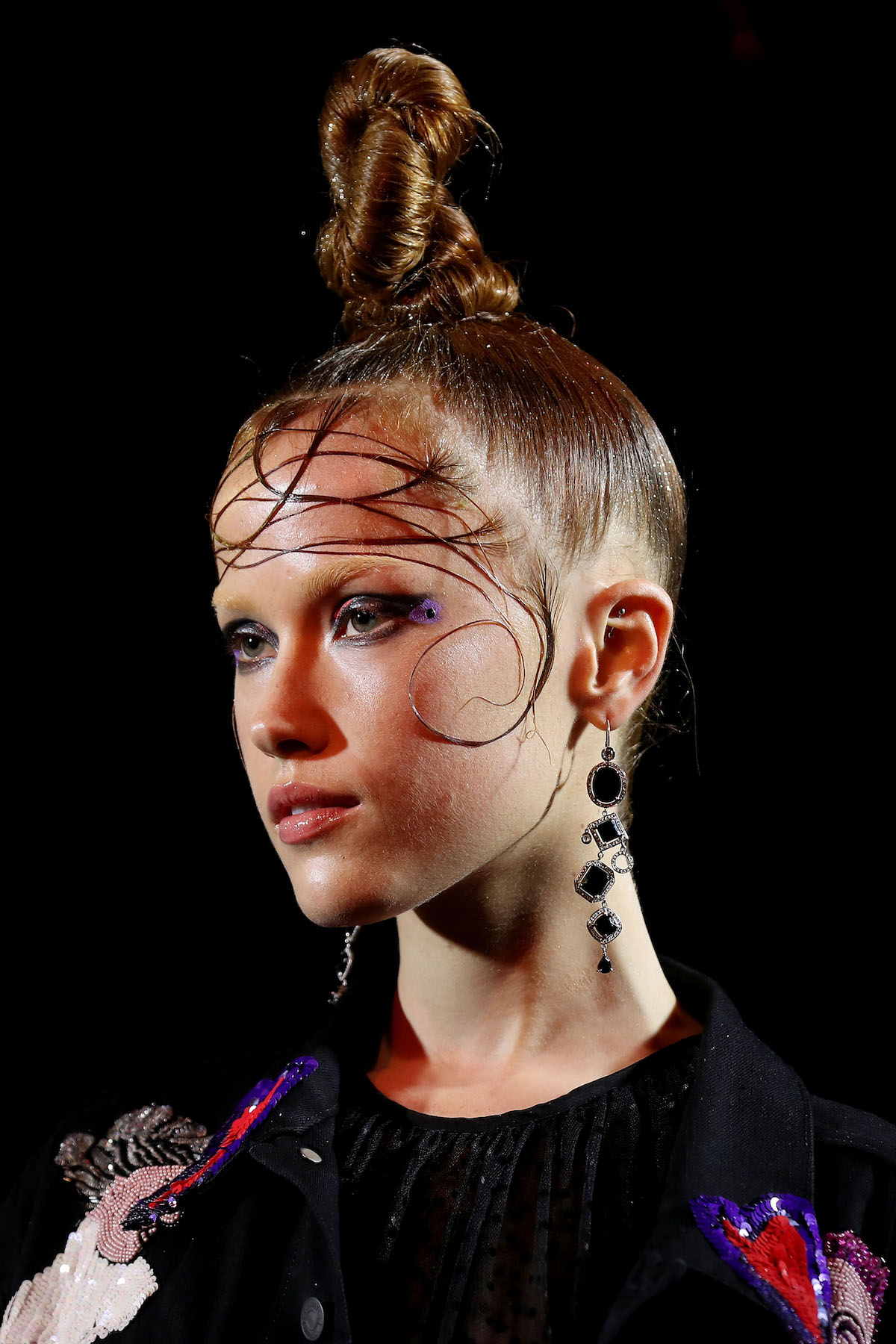 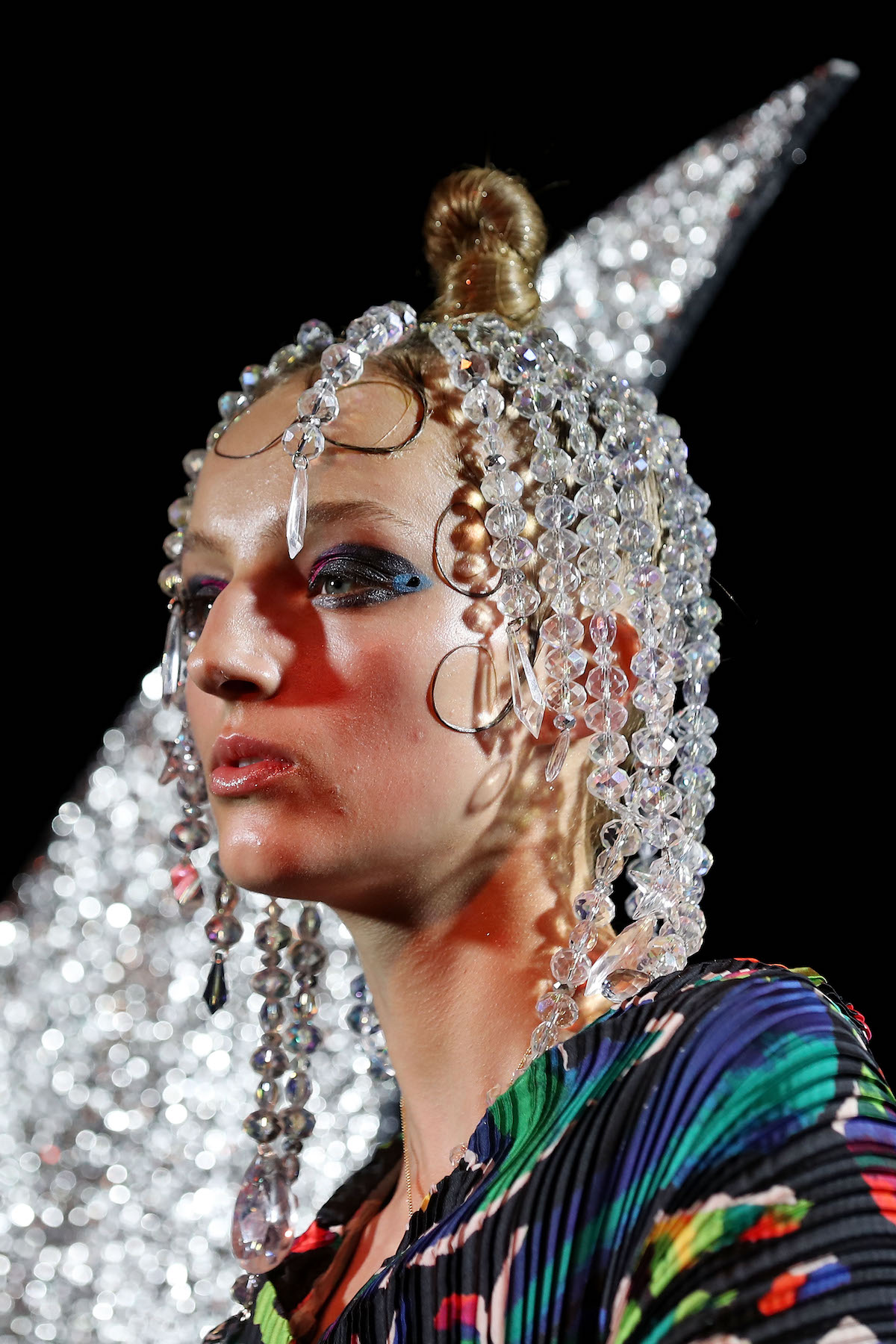 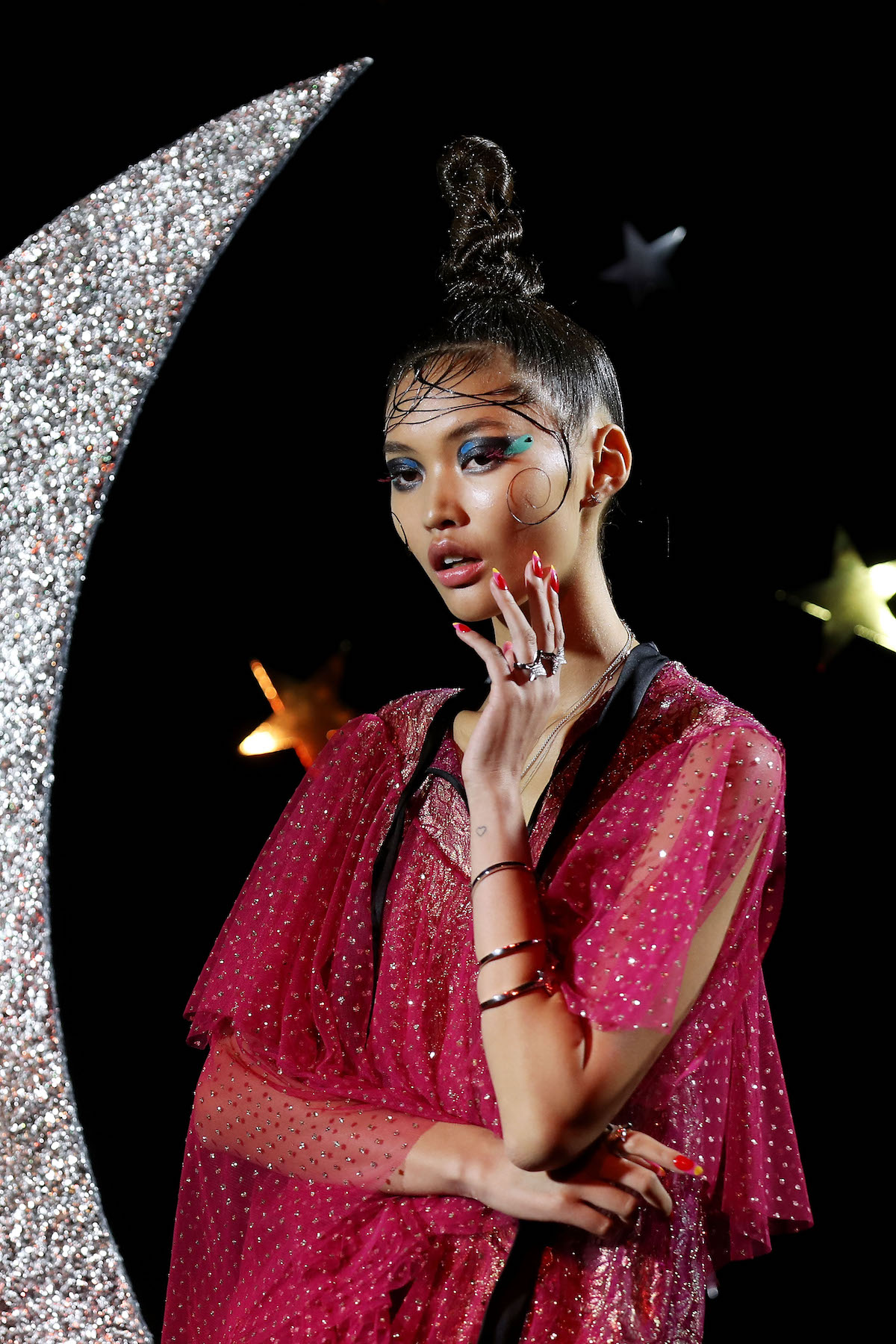 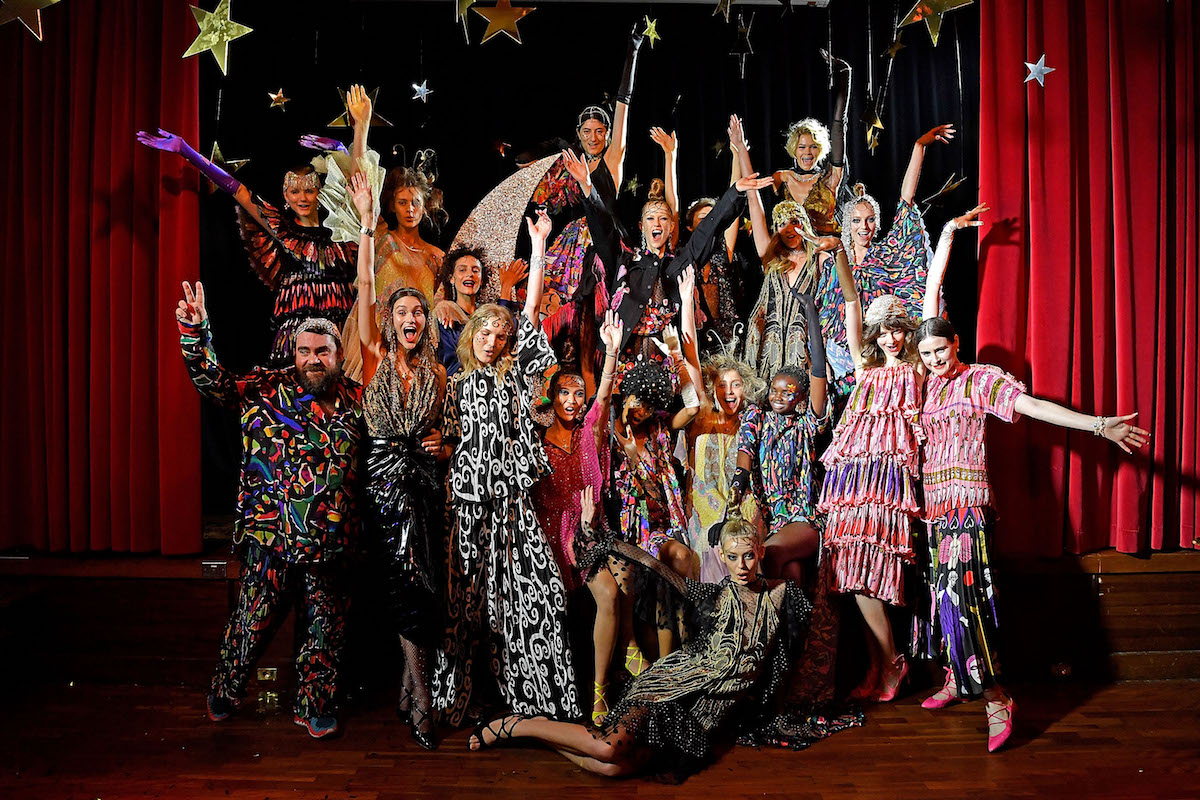 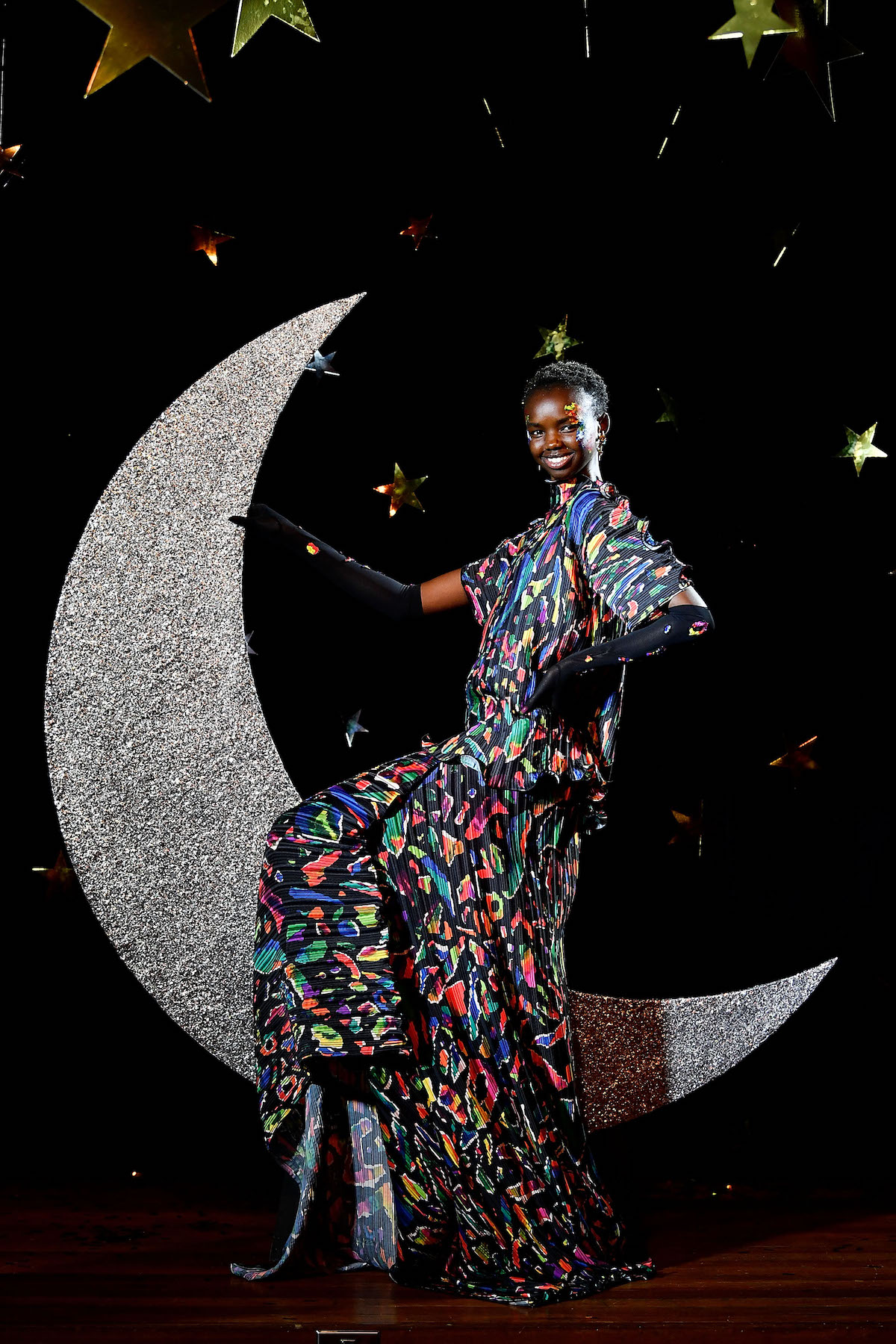 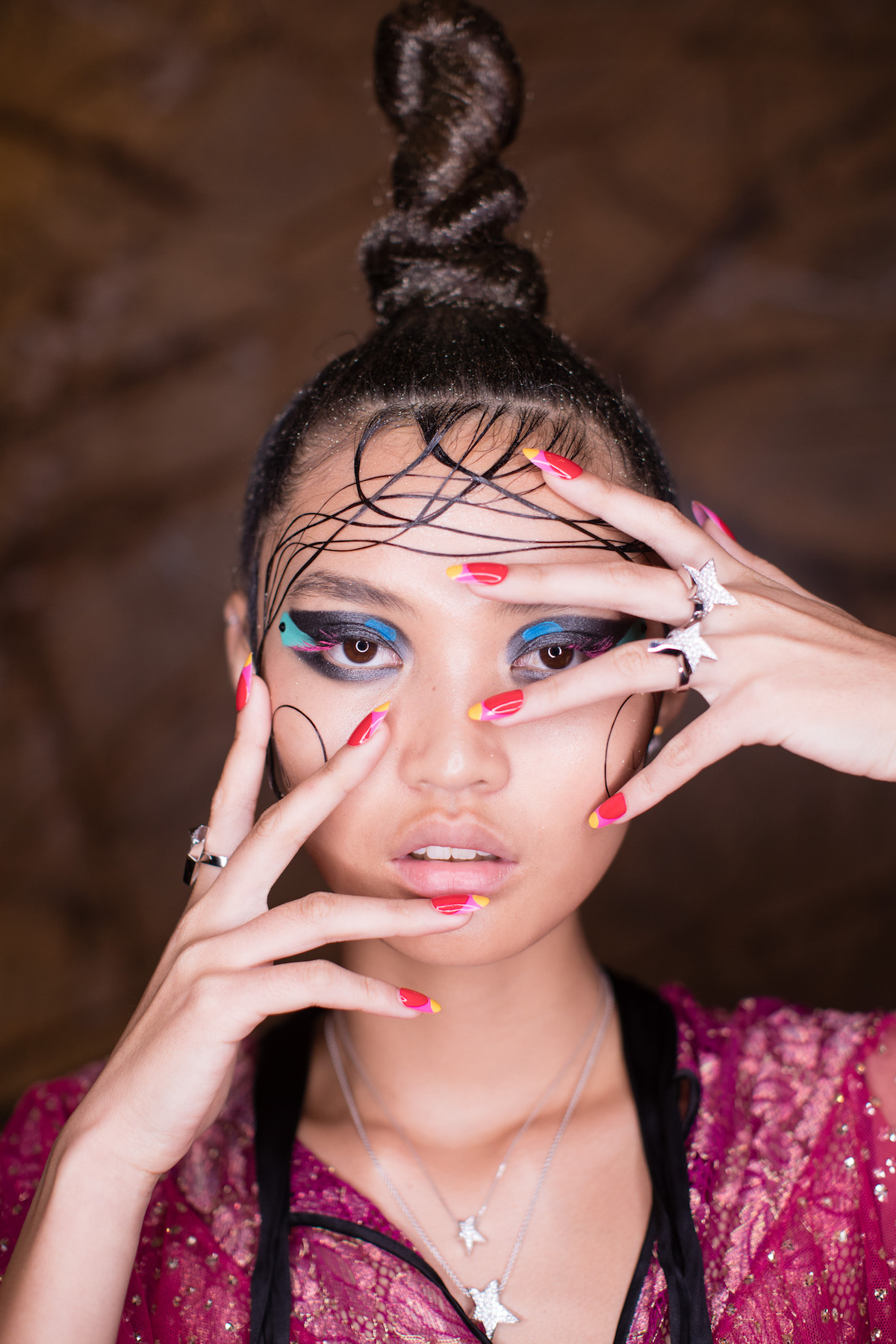 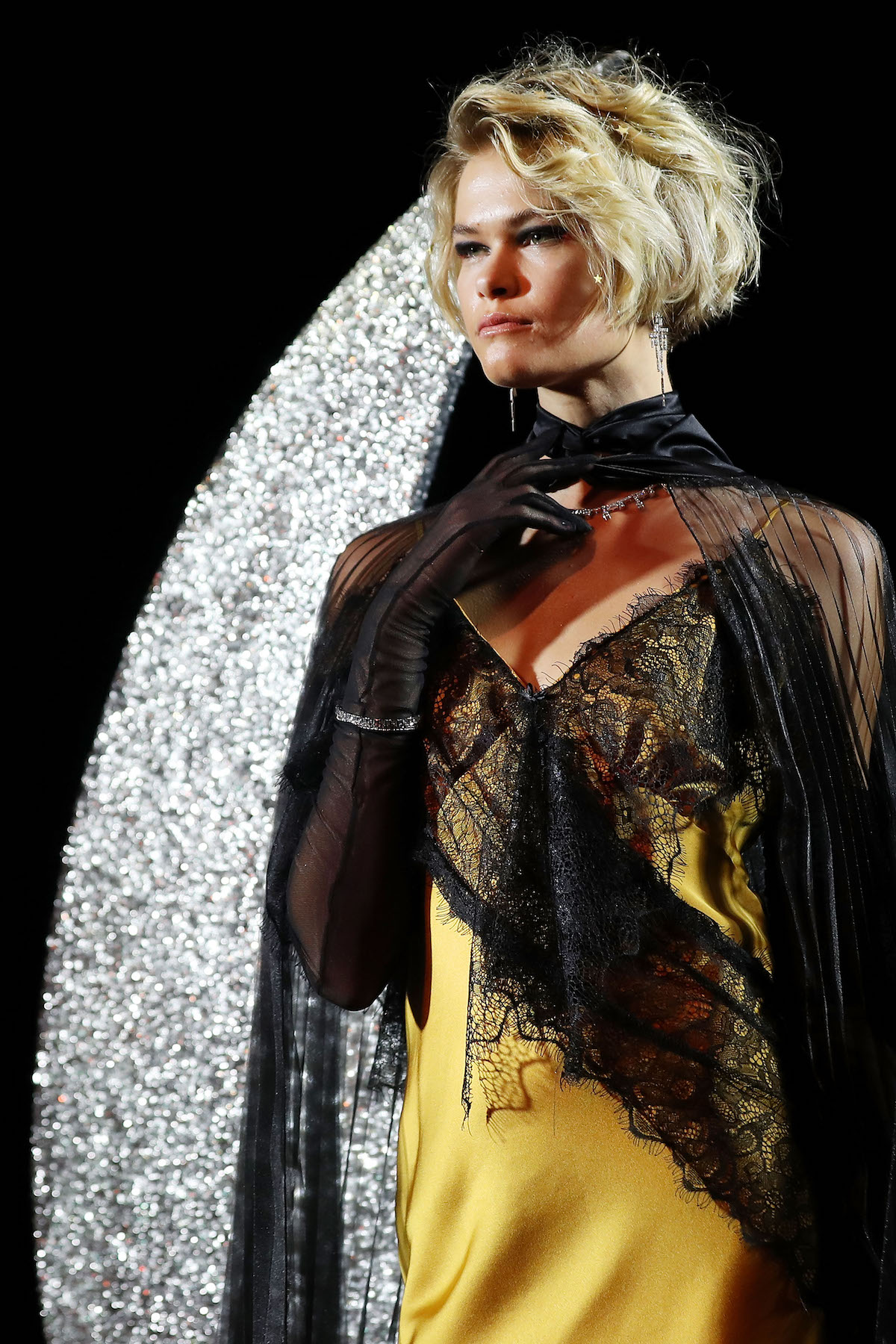 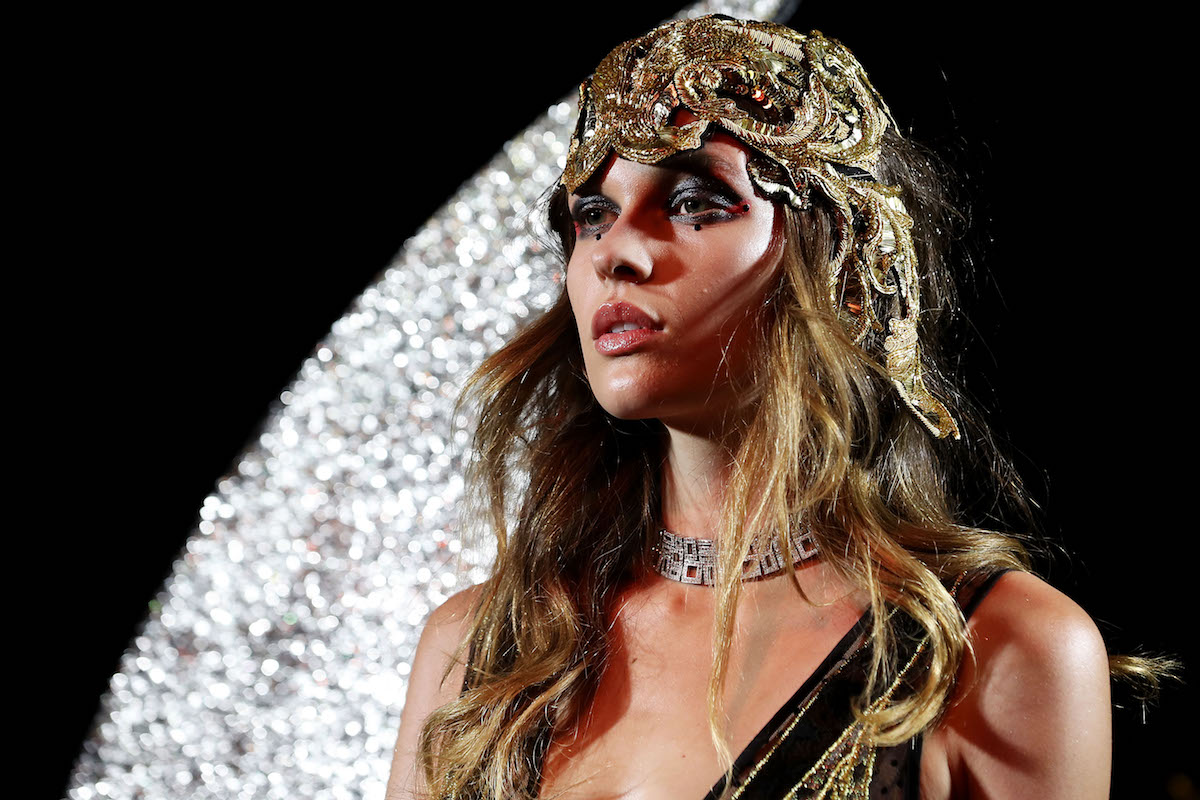 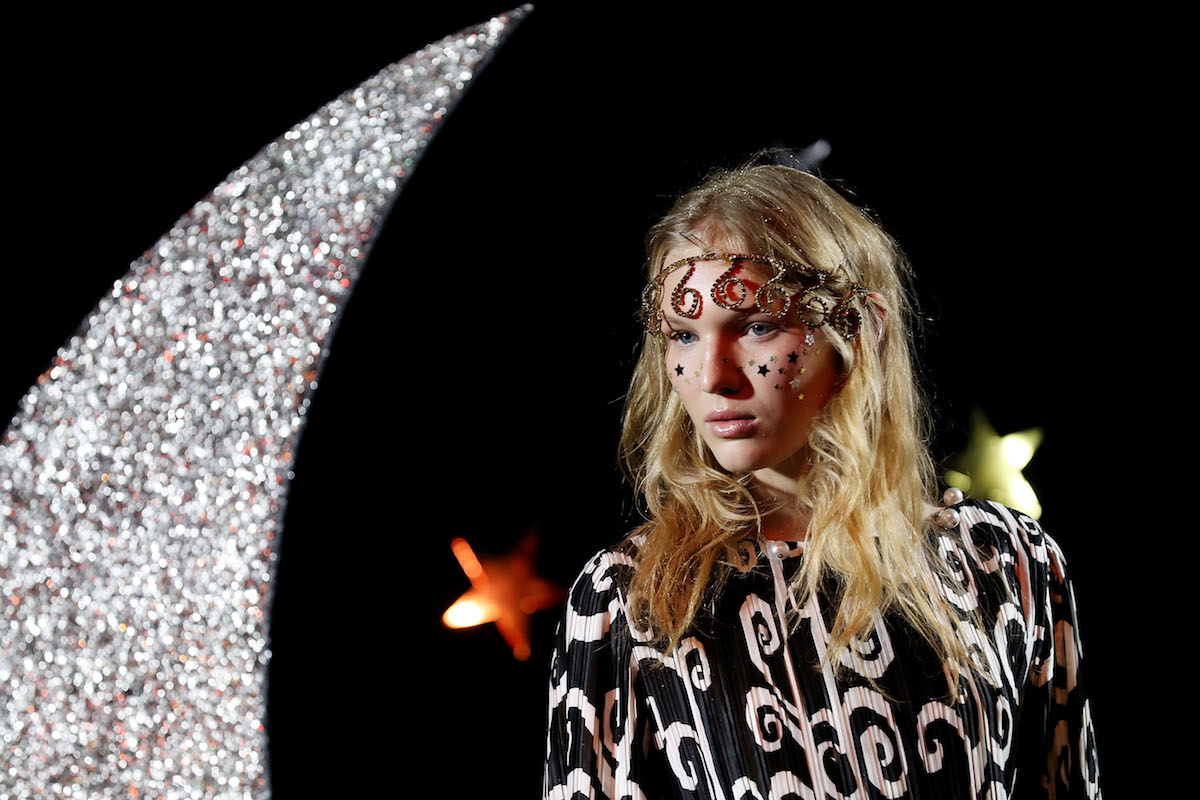 One cannot think upon Australian design mavericks ‘Romance was Born’ without a plethora of kaleidoscopically colourful, lavishly majestic and glitter-embellished images flooding their consciousness.

For their Resort ’19 offering titled Opal Goddess, the iconic homegrown outfit delivered just that. And then some.

The Collection: Choosing Sydney’s Franco-friendly Hubert Restaurant and Bar as the setting du jour for this year’s fanciful display, designers Anna Plunkett and Luke Sales took voyeurs on a mystical journey through underground Paris, complete with a decadent French dinner spread, lip-syncing drag queens and lashings upon lashings of champagne infused opulence (and glitter no less – more on that later).

This year’s collection saw the designers tee up with long time friend and muse Jenny Kee, whose colourful prints informed the fabric for many of the show’s garments, including imagery from the designer’s rainbow opal designs, coiled vine patternry and a heavenly goddess silk collage featuring such icons of feminine divinity as Gaia and Aphrodite.

“This season Romance was Born bow before the ancient altar of the primordial goddess,” the show’s blurb pronounced in reference to this year’s conceptual inspiration.

“She shapes the essence of the season along with iridescent visions of opals to ignite the fire of your heart, elegant butterflies spreading peace with a single wing beat and ethereal dancing muses who inspire us to live in harmony with the universe.” Amen.

The Hair: The goddess tasked with curating a series of uniformly divine hair looks was none other than Renya Xydis, who led a team of Wella stylists in creating a series of bespoke hair looks to fit the brand’s theatrical zeitgeist. (Think: Bejewelled and gilded head dresses, scattered sequin stars and layer upon layer of glitter).

“Working with Romance Was Born is (much like the collection) a dream for me,” enthused Renya. “Anna and Luke’s creativity and openness towards design allows me to be experimental with the hair styling.”

[For this evening’s show], We channeled ‘goddesses’ across multiple looks, using a spectrum of EIMI styling products and of course, glitter. All of the glitter.”

One such masterpiece of glittered wonder was an artfully twisted topknot, with sleek face tendrils all but painting the forehead for maximum impact. Following styling, hair was coated in a layer of glitter, which shone beautifully both on stage and off.

How to create The Iconic Glitter Twist: Step One: Using a toothcomb, section the hair into two parts, separating the hairline from the bulk of the hair

Step Three: Where required, attach length (hair piece) to the base of the pony tail, ensuring this is tightly wrapped at the base, keeping the pony tail separate (you will need two pairs of hands here)

Step Four: Using EIMI Glam Mist and Perfect Setting, use a soft brush to slick the remaining sections up towards the pony, and fasten with elastic

Step Six: Use both hands to twist the pony into a tight, solid spiral. Use the hands to twist upwards and get as much height as possible – fastin with pins

Step Eight: Using a small paintbrush, stick to the forehead and arrange in spirals

Step Nine: Finish the look with generous amounts of EIMI Super Set (to hold) and Glam Mist (to finish)