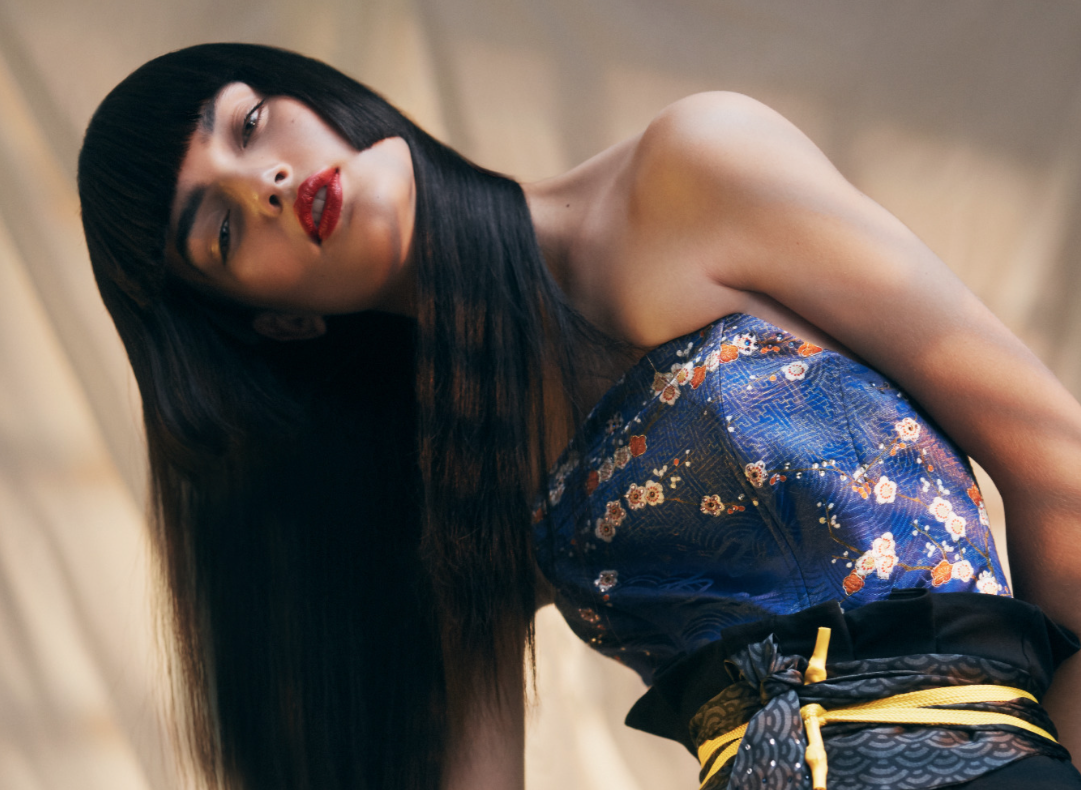 I’ve always had a lot of respect for Shu Uemura Art of Hair and I love the concept. It’s like painting, you have a bowl, you mix things and you create … as they say, ‘The Art of Hair,’ and it is. 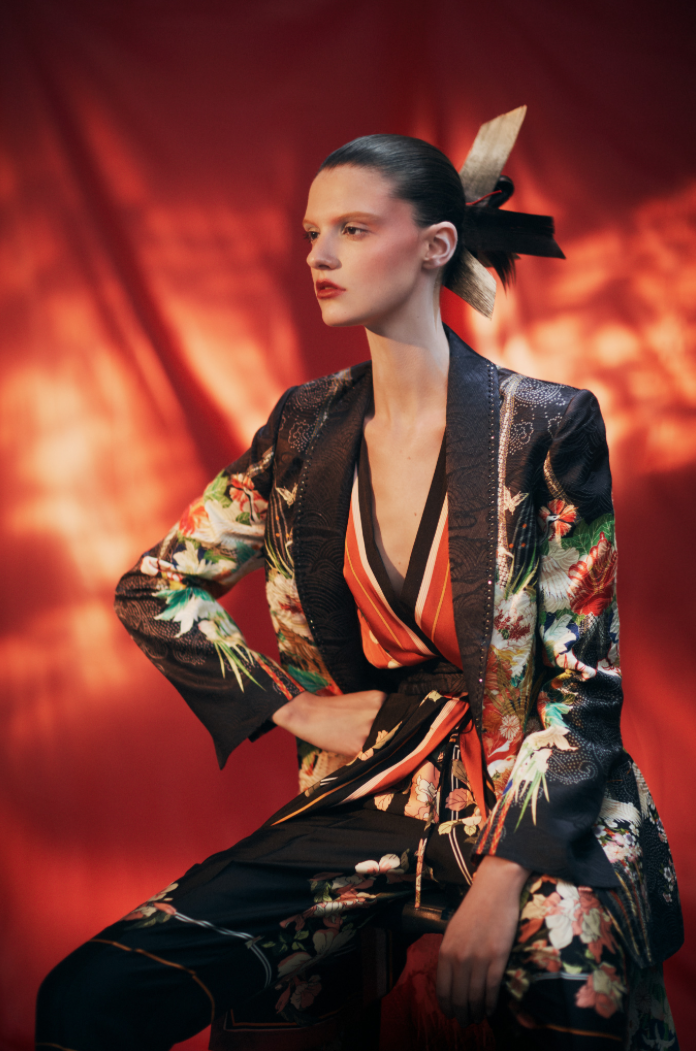 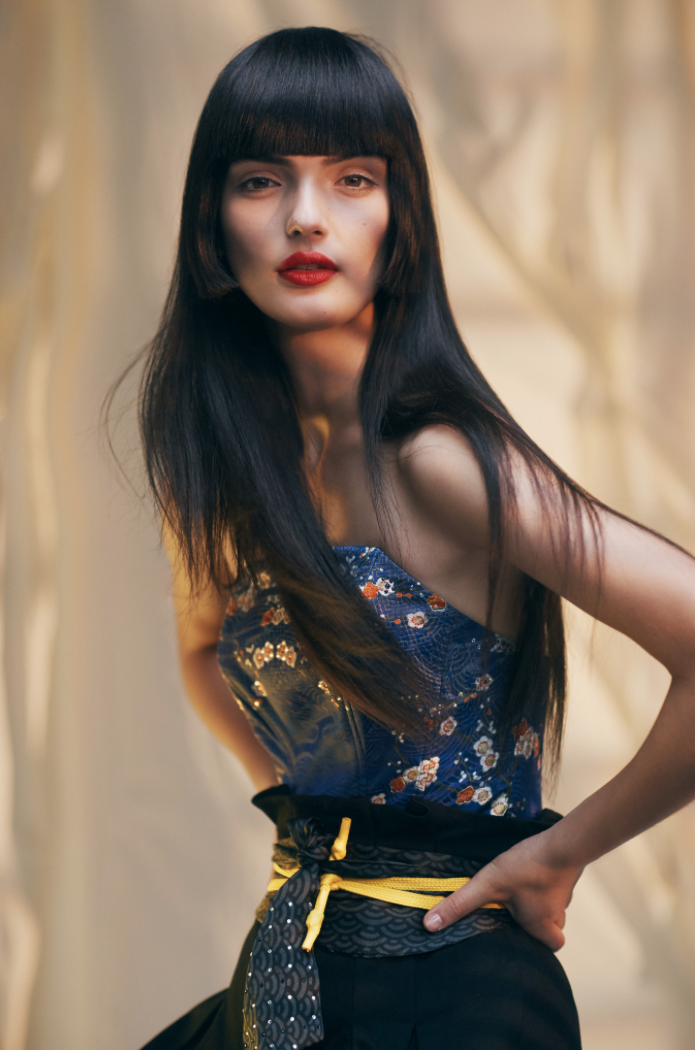 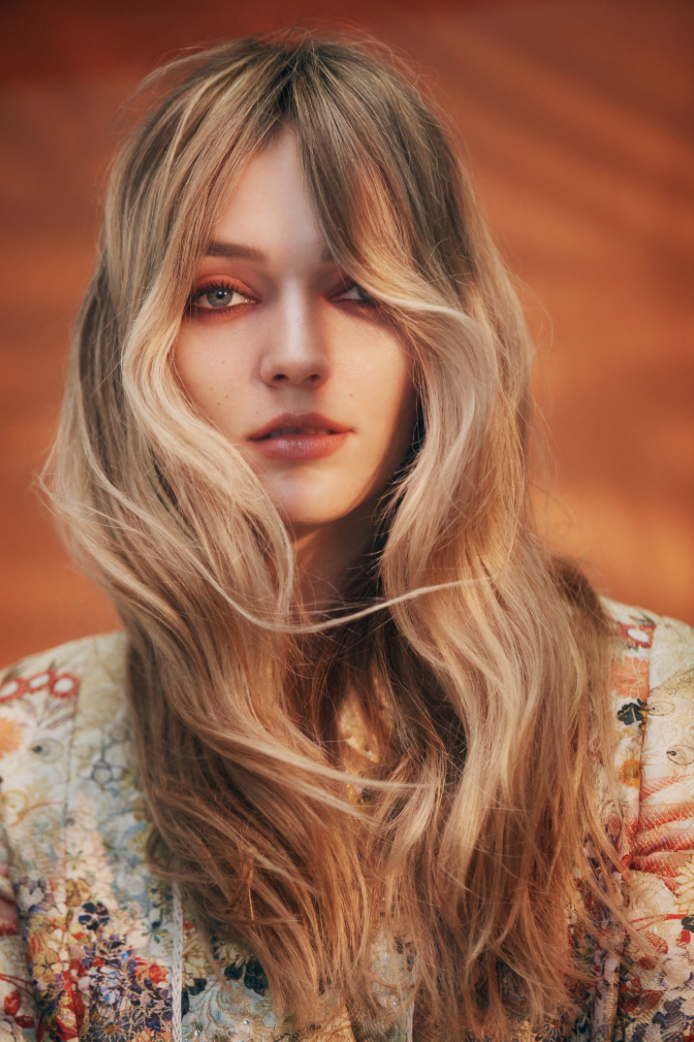 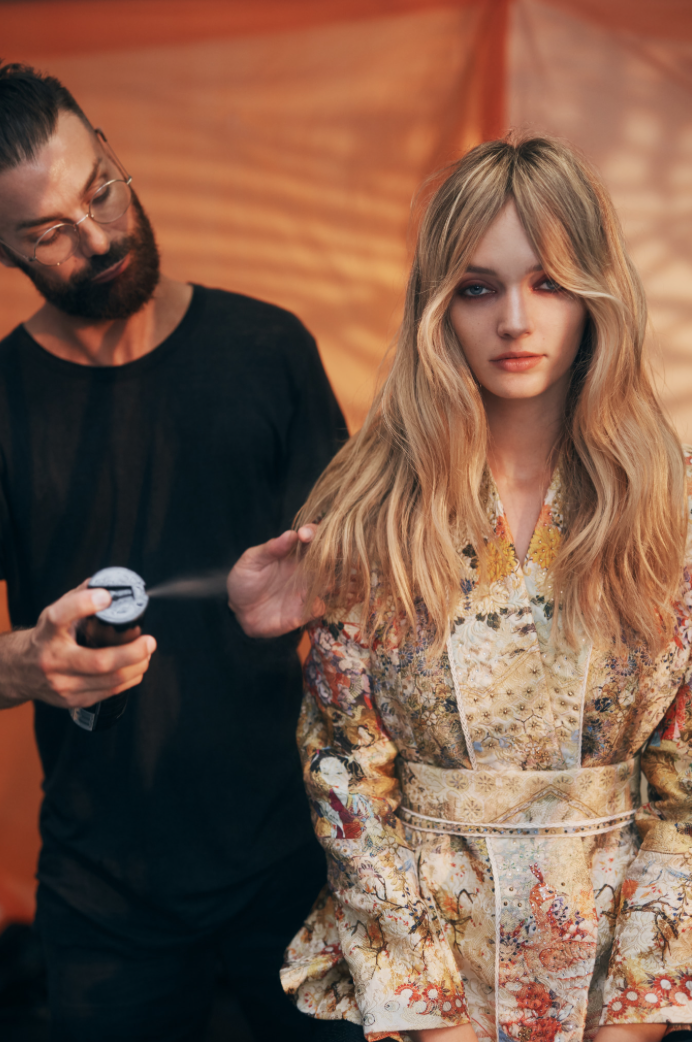 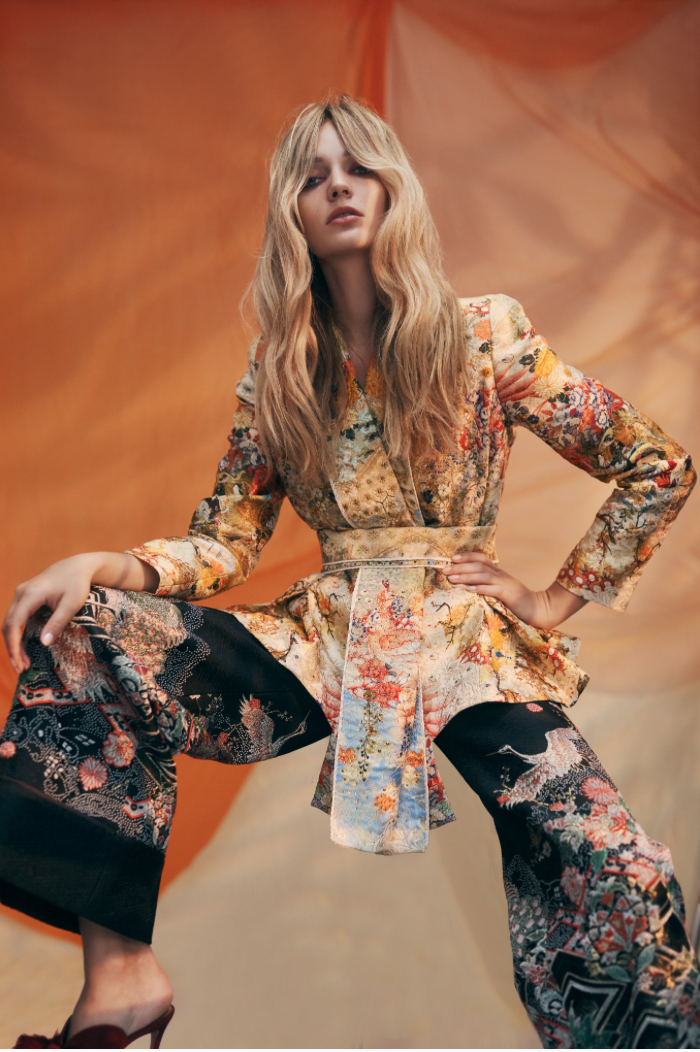 It’s likely you’re more familiar with the regular session work of Daren Borthwick  than the man himself. He’s cool, classic and super talented, and despite influencing some of the world’s major hair moments from New York to Milan, Harpers to VOGUE, generally likes to operate behind the limelight, not before it. Like all genuine talent his success is based on skill, not bravado.

It is all this and more that painted Daren the ultimate candidate for the title of Shu Uemura Art of Hair Creative Director, Australia – the pair a pared back stroke of brilliance that in all their understated elegance, are geared to bring a real point of difference to local industry education and beyond.

“Yes, this is the first time I’ve been approached by a company and I feel like it’s right … basically I get to work with the brand and educate people on what I do, session work, and I get to do that in a really intimate, meaningful way, ” says Daren.

Daren’s journey with hair began at age 6 with rollers and a human hair wig, and has been an unconventional journey ever since.

“I always had a thing for hair, but I originally denied myself of this and thought I’d be a chef. This lasted a week and so I literally lined up around the block for the chance to apprentice at a salon in South Australia called Head Hunters … and got the job!”

Owned by a “crazy English couple” Daren bypassed cutting and got straight to work on hair extensions and, as dictated by the 90s, Boy George-style dreadlocks.

“They sold up and went to England, and all I knew were these crazy, alternative techniques … I didn’t know how to cut hair!”

Daren moved to a salon called Hedgehog where the owners, clearly seeing something special in the young artist, spent nights teaching Daren how to cut. He mastered the art but the editorial world kept knocking, a request to style the hair of 90’s pop sensation Black Box (Right on Time) for a festival gig (and later Kylie Minogue) making his calling clear.

“Doing Black Box’s hair was my first ‘this is what I want to do, I want to work in editorial’ moment, and so after spending some time traveling, I packed up and moved to Sydney.”

Daren did it tough for several months, cold calling salons around the city – many who hung up in his ear – before a chance encounter with Renya Xydis’ then assistant landed him a job at Valonz (where he still operates one day a week on the floor). That was 17 years, countless shows, hundreds of editorial gigs, campaigns and celebrity moments ago. Today, Daren is considered one of the greatest session stylists this country has ever produced, and he has worked damn hard to get here. He has learned how to pull back on-set, use products in ways you would never think possible and bring the unexpected to ‘hair.’ The kind of experience and insight invaluable to any hairdresser, big or small, eager to make their mark and move up as an artist both in-salon and backstage. Experience that, for the first time ever, and intimate group of lucky Shu Uemura Art of Hair artists will have full access to.

“The workshop will go across two days and is designed to educate each attendee on essentially curating powerful imagery to build their profile on social media,” says Daren.

The team will start with an education session on social media and then move into a workshop with Daren where they are taken through three looks (per semester). There will be no stage and no microphones, just a tight team standing as they would backstage around a working artist – absorbing, learning, asking questions, collaborating, growing. Each team member will then elect one of the three looks to interpret one-on-one with Daren. Finally, the last day will see each attendee create their interpretation for capture on a professional photo-shoot with the final images ready for upload to social media.

“The looks are basically ideas, it’s not like ‘this is how you have to do it.’ I want to educate on how to create freely as an artist. We’ll be working through some freehand cutting, dry cutting and a series of workable textures from straight to curly and frizzy… I want to show the team that it’s about creating an image, not pulling the hair down at a particular angle, for example.”

And this is the beauty of Shu Uemura Art of Hair. It’s a brand of products, people and processes that act as a guideline, not a given. They’re as open to interpretation as you are – you’re the artist after all.

“What I love about the Shu Uemura Art of Hair product range is that it’s all about mixing so the texture possibilities are truly endless. For example Kengo Feather and Satin Design together are amazing,” says Daren.

“Yesterday I was requested to take a look from super polished to wet as though the model had just come from the beach. Now this hair had a LOT of hair spray in it, it was brushable but I could tell that if I wet it, it would be disastrous. So I completely drenched the hair in Shu Uemur Art of Hair Essence Absolue Nourishing Hair Oil and you should have seen it, it was such an incredible, luxurious finish – they loved it!”

Clever use of products and processes visible right here in the first Shu Uemura Art of Hair semester series, and as shot by fashion photographer Georges Antoni. A collection of images indicative of great things to come for the hand selected ‘Shu Cru’ lucky enough to learn each technique, twist of the wrist, unlikely production selection and session secret making each look a reality. ‘For art is not what you see, but what you make others see.’ 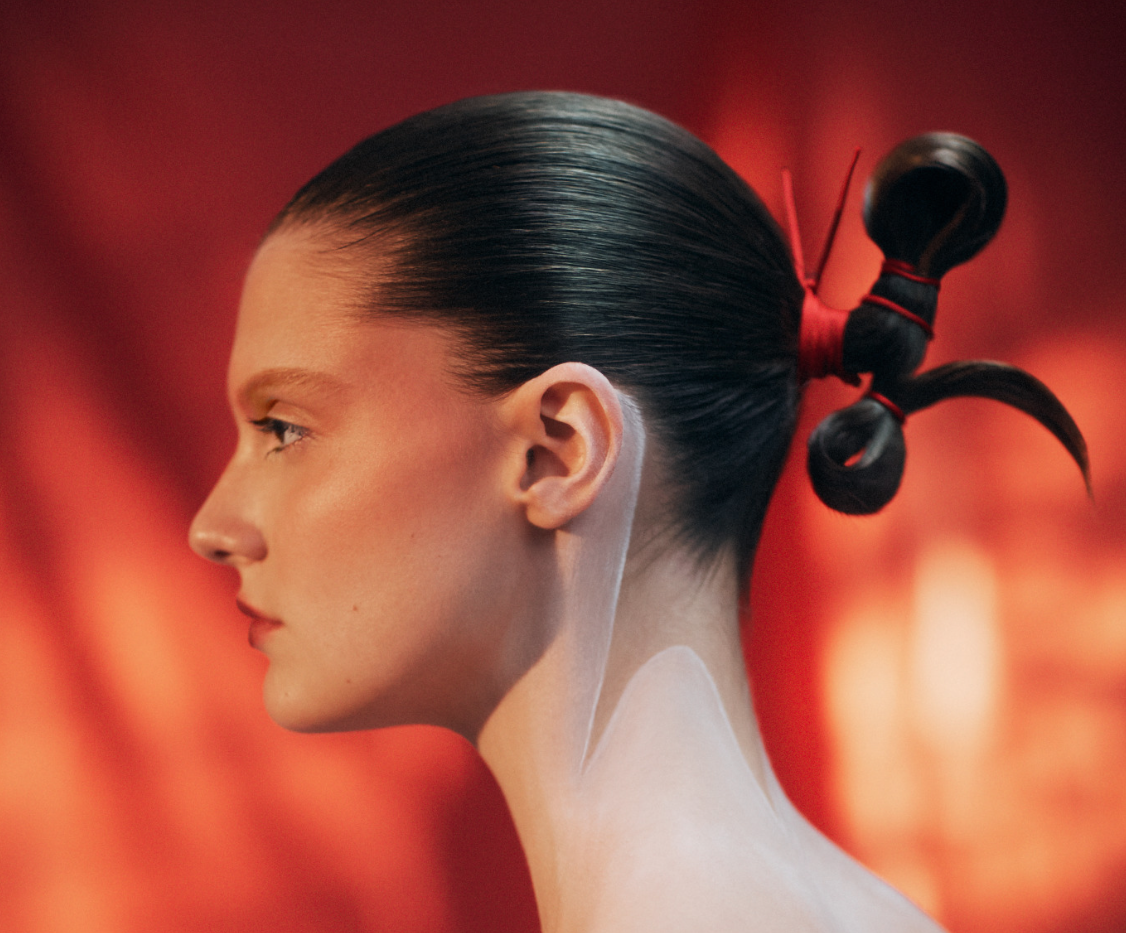