The gross, the gory and the downright terrifying. Some of our favourite Aussie stylists share their (real) hair horror stories… just in time for Halloween.

So it was in the salon one day. I was doing a regular three-week client for a tidy up and on this occasion, while trimming around his ear, I accidentally cut the bottom of his earlobe – off. Now that bastard did not stop bleeding and I was so shocked and very apologetic … but for my client, it didn’t seem to bother him all that much. I thought it was really weird, but I gave him a free haircut, had nightmares for the following weeks and never expected to see him again. Then three weeks later he shows up, I ask him ‘how’s the ear?’ and then notice stitches. He says ‘hey listen I’ve got something to tell you. I was going to mention it the other day, and I actually feel bad I didn’t. I know I have very large earlobes, so I was booked to see a plastic surgeon about getting them lifted. I had the operation done last week and the bit you cut is no longer there!’ WOW not only was I relived but kinda angry … I did half the Doctor’s job and there was no need for a free haircut! 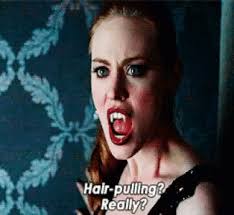 When I was younger I witnessed the most scary thing I’ve ever seen in-salon. I worked with a hairdresser that convinced a wavy haired male to have a chemical straightening service. The hairdresser combed the ‘very strong product’ in the wrong direction, combing it back when the headline grew forward. Then they over-processed the product. When I rinsed his head … the hair was glued to his scalp. They couldn’t even shave his head because the clippers couldn’t break through the hair. Sleepless nights for everyone concerned!

An apprentice once applied a 22/0 (black) instead of 0/22 (ash additive) in a tint for one of our VIP blonde clients. Thankfully I noticed whilst it was processing and rinsed it just in time. Disaster averted.

Being the daughter of a hairdresser, there’s a few to share, but there’s one that stumps getting a bristle round brush (the size of my pinky) stuck in my hair and having to cut a short fringe to get it out… When I was 13, I had a sleepover with five of my friends. It was the school holidays and mum was going to work for the day – we were finally at the age to be trusted home alone. All of my friends wanted their hair coloured like Ginger Spice and I may have said that I knew how to do it (I didn’t!). I somehow snuck bleach (and whatever else I thought I needed) from my mum’s salon (sweet talking one of seniors at the time) and each of my friends ended up with two very large streaks on the top of their hair… and gingery red on the remainder. The same colour for all! The bathroom looked like a crime scene, and let’s just say their hair was a far cry from Ginger Spice’s… We/I was busted, and the rest is history.

It may not sound horrific to most, but when I was 17 years old I was put forward to style hair for a jewellery campaign. I was so excited that I agreed immediately. However when I rocked up on the day and saw the hair references, I realised it was completely beyond me. The sweat started coming down fast… Somehow I managed to  pull it together, and everyone in the team assumed I was in full control. If only they knew that I had no idea what I was doing… A lucky day in the office, but I still sweat thinking about it.

This wasn’t actually something I did… it was something that happened to me early in my career when I was having my hair done. The colourist tried to deepen my level 7 roots to a 4 but accidentally mixed the colour with 20 vol and gave me glow roots… She then recoloured my roots, put me under heat twice then when the pain was so bad I couldn’t take it anymore, proceeded to dump a red mix over it to try and blend it. Worst colour of all time and I had such terrible scalp burns that it took eight months for the bald patches to grow back in around the crown. The texture of the hair on my crown is forever changed because of that day. HORROR!

LAUREN MCCOWAN (PART 2) | THE COVER UP

Another horror story… (Editor’s note: this was too good not to share) NYFW circa 2009: I went as an assistant end ended up becoming the stylist of a massive show, with a massive model and a look that required tiny kiss curls at the front hairline. We had to use these gnarly metal tongs… think, old school tongs that sit in metal heaters. I was curling her front hairline and someone bumped into us… and I f*%#ed up her forehead. She had a perfectly straight burn of about 6cm across her forehead. Perfect placement… I had the extra embarrassment of having Val Garland try to cover it up!

This is honestly the worst thing that’s happened in salon… I once entrusted a contractor with a colour for one of my regular blonde clients. I specified the exact formula and developing time however she didn’t listen and chose to do things her own way… The next thing I knew, she came into the colour room crying, “The client is at the basin… her hair is breaking off!” I made my way to the basin to find all of my client’s hair gone… except for a centimetre at the scalp. I took my client into a room and explained what had happened… while the contractor howled in the office. The client cried a little, picked herself up and said, “I better just own it, otherwise people will know!” She was amazing about it! The next day the contractor resigned…

Ever had a client turn up three hours late and then proceed to scream at you in front of an entire salon because (even after admitting they were late) they insisted on having their hair done… and weren’t taking no for an answer? With her oversized Louis Vuitton over one shoulder, she then went on to tell me she had the money… to which I politely responded (again!), “Unfortunately you’re late and have missed your appointment by three hours.” After spending a further twenty minutes trying to please this client (and offering her other extremely capable and talented stylists who were available) she then told me to grow a d*#k and warned me not to palm her off. I thanked her for her compliment… and killed her with kindness by calling security and asking to have her removed from the premises.